In January 1988, the Tweede Fase Opleiding Internationaal en Europees Recht [Postgraduate Course on International and European Law] started for the first time. A course for PhD students, in Dutch: AIO’s – a Dutch abbreviation for assistent–in–opleiding [assistant in training] – a phrase used at Dutch universities for junior researchers working on their PhD.

The first course was preceded by a long preparation. As early as 1983 the universities participating in the T.M.C. Asser Instituut decided to develop a post-graduate course and to concentrate it in the Asser Institute. The decision resulted from the changes in Dutch academic education since 1982. Doctoral studies were limited to four years, after which some of the graduates were offered and opportunity for further academic development as PhD student. But additional training in academic research was deemed necessary. After the founding of an inter-university Steering Committee, the granting of funding by the Ministry of Education and Science in 1985 and the set-up of the Tweede fase-Secretariat in 1986 (for photo see 1989), the course was offered to the Dutch universities in 1987 with the request to select their candidates for enrolment. In January 1988, the first course started with ten candidates.

The study programme consisted of a four-month seminar stage in the Asser Institute, a three-month research stage for individual academic research guided by an expert in the relevant field, and an optional training period offering researchers the opportunity to gain practical experience in an international legal working environment.

The course was accessible for everyone graduated in international law, but most of the candidates were PhD students selected by the Dutch participating universities. In the following years, the course was organised each year until in 1994 the Steering Committee decided to discontinue the course, due to the low number of graduates enrolled.

In subsequent years a lot of talented young academics successfully completed the course, many of whom now hold prominent academic positions. 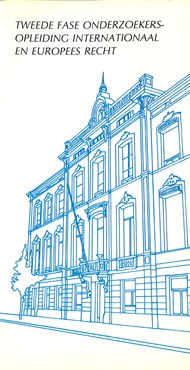 Cover of brochure Post-graduate course on International and European Law