In 1990 the T.M.C. Asser Instituut celebrated its 25th birthday. In advance of this festive occasion the Institute’s general secretary made contact with the Dutch postal organisation (PTT), requesting that a special stamp was produced. Unfortunately no one at PTT had ever heard of the Asser Institute or the scholar.

This was, however, not the end of the enterprise, for the staff member then pointed out that Tobias Asser had been a Nobel Peace Prize laureate in 1911, and would they not consider putting not the Institute but its name giver on a stamp? This idea resulted in a series of three stamps with Dutch Nobel Prize winners (the others being J.H. van ‘t Hoff - chemistry in 1901, and P. Zeeman - physics in 1902) in 1991, with Tobias Asser on the most used stamp, for letters. In 1993 and 1995 two other series of each two Dutch Nobel Prize winners followed. 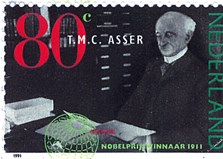 In 1904 the Nobel Peace Prize had been awarded to the Swiss Institut de Droit International, of which Tobias Asser was co-founder and still a member at the time. 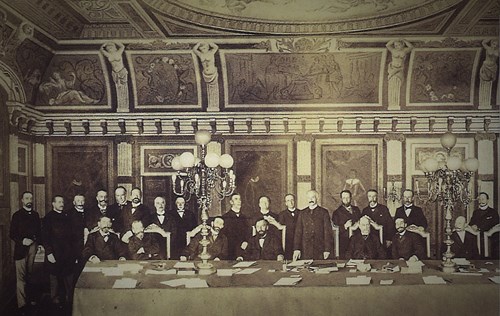 First meeting of the Conférence de La Haye in 1893, organised by Asser in the Trèveszaal in The Hague. Tobias Asser is 8th from the right