Two events characteristic for the new developments in the T.M.C. Asser Instituut since Gerard Tanja succeeded Voskuil as general director of the Institute (see 1994) took place in 1996.

The Asser Dissertation Programme (ADP) started in January 1996. In order to support and stimulate research in the field of both public and private international law, international commercial arbitration, and the law of the European Union, the programme offered young, talented researchers the opportunity to work exclusively on their doctoral thesis. For this purpose the Institute offered various individual research scholarships for a maximum of four years. Until the Asser Institute decided to discontinue the programme in 2010, 19 candidates participated in the ADP, five on the basis of co-funding with the University of Tilburg, one participant’s scholarship was co-funded with the University of Utrecht, and the last candidate who obtained her PhD in 2010, received a scholarship of both the Institute and the University of Amsterdam. For an overview of the former “ADP-ers” as they used to be called in the Institute see: the participants Asser Dissertations Programme included in the database Asser PhD’s (= alumni-overzicht).

In 1995, the so-called Asser Round Table Sessions were introduced. These sessions provided a forum for informal discussion on topical issues in international and European law. To ensure an ideal working environment, participation was by invitation only and attendance was in principle kept to a maximum of 30 persons. According to the topic under discussion, experts from relevant sectors (universities, ministries, parliament, legal practice, NGOs, etc.) were invited to take part in the debate.

On 12 January 1996, the first Round Table on sports law was organised on “De afschaffing van het transfersysteem in het betaald voetbal – de Bosman zaak” [Abolition of the transfer system in professional football – the Bosman case] [More] discussing the consequences of the decision of the Court of Justice of the EC in the so-called “Bosman case”. Back then sports law was not viewed as a serious academic field of international law, and the Asser Institute was the first organisation in the Netherlands to organise an academic international law meeting on the Bosman case. Professors of European Law, lawyers specialised in sports law and leading football officials were invited to attend this Round Table. To everyone’s surprise the number of people who wanted to attend (or rather asked to be invited) was so large that the Institute decided to organise the Round Table for a second time on 2 February 1996. Besides, it generated so much publicity that for the first time in the history of the Asser Institute Dutch television came along.

Moreover, with these Round Tables on sports law the foundation was laid for the later Asser Sports Law Centre, until the present day a thriving department at the Asser Institute.

On 18 June 2015 a one-day symposium will be held to analyse and highlight the significant legal, political and societal relevance of the landmark Bosman ruling, entitled “20 years later: the legacy of Bosman”. 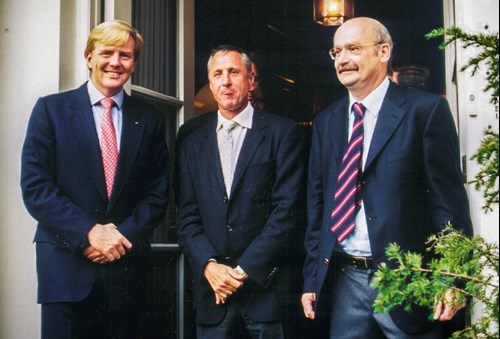 Prince Willem-Alexander of the Netherlands (now King Willem-Alexander), Johan Cruyff and Asser Institute’s Rob Siekmann,
on the occasion of a Sports Law Round Table in 2004 (Photo: Asser archives)

Bosman case: Judgment of the Court of Justice of the EC of 15 December 1995 in case C-415/93, Union royale belge des sociétés de football association and others v Jean-Marc Bosman (Free movement for workers - Professional footballers - Sporting rules on the transfer of players requiring the new club to pay a fee to the old club); ECR (1995) I-4921