On the occasion of its 50th anniversary, the T.M.C. Asser Instituut launched the T.M.C. Asser Lecture for the benefit of The Hague’s national and international legal community, scholars, practitioners, judges, policy-makers and journalists who will be able to enjoy, on an annual basis, a lecture by an internationally renowned jurist and outstanding public intellectual. The inaugural lecture was delivered on 2 December 2015 in The Academy Hall of the Peace Palace in The Hague by Prof. Joseph Weiler.

In his opening address, Prof. Ernst Hirsch Ballin, President of the T.M.C. Asser Instituut, welcomed the attendees to the celebratory event and reflected on Tobias Asser’s role in the development of international law and international legal institutions. His goal to reshape and develop international law to build trust across countries is still a source of inspiration for the T.M.C. Asser Instituut, evidenced by its mission as presented in its research agenda for the coming years: “International & European law as a Source of Trust in a Hyper-connected World”. The Asser Strategic Research Agenda (2016-2020) aims to examine how law as one of the social institutions can contribute to the construction and cultivation of trust and trusting relations needed for cooperation in this large and hyper-connected world. As such, it fits well with one of the themes identified in the National Research Agenda: “between conflict and cooperation”. 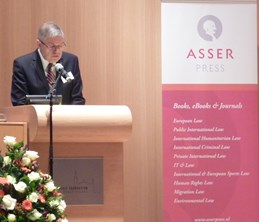 Dr. Christophe Paulussen, Senior Researcher at the T.M.C. Asser Instituut, presented the first copy of the Asser Jubilee book ‘Fundamental Rights in International and European Law. Public and Private Law Perspectives’ published on the occasion of the Institute’s 50th Anniversary, to the Minister of Security and Justice of the Kingdom of The Netherlands, Mr. Ard van der Steur. The book is reflective of the breadth and scope of the research at the T.M.C. Asser Instituut, with fundamental rights providing a common foundation. Mr. Ard Van de Steur, Minister of Security and Justice, praised the T.M.C. Asser Instituut for its ability to combine high quality academic research with projects aimed at legal practitioners, thereby ensuring a linkage between legal theory and the more ‘down to earth’ everyday practice. He reflected on the functions of the rule of law and fundamental rights in our society, addressing the delicate balance between these ideals and counterterrorism policies and operations. He emphasised that the rule of law and fundamental rights are not only a moral heritage of European culture, but are still essential elements for stability, economic growth and international peace and security, and should therefore not be sacrificed for narrow, short-term victories (full speech available here).

Prof. Janne Nijman, Academic Director of the T.M.C. Asser Instituut, introduced Prof. Joseph Weiler, one of the most prominent scholars in the field of international and European law, and conveyed the idea behind the Annual T.M.C. Asser Lecture. While inspired by Tobias Asser’s thoughts and actions in the past, these lectures will be future-oriented. In the coming years, the Institute will invite distinguished international lawyers to take inspiration from Asser’s idea of cultivating trust and respect through law and legal institutions, and to examine what it could mean in their area of expertise today. 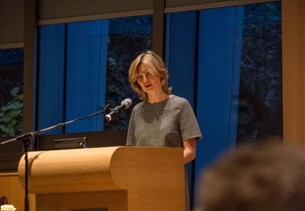 The event culminated with the inaugural lecture "Peace in the Middle East: has International Law failed?”, delivered by Prof. Joseph Weiler, President of the European University Institute and University Professor at NYU School of Law. Instead of directly addressing this question, he reversed it by asking if we have failed international law by not applying it correctly in the Arab-Israeli conflict. He approached the controversial topic by meticulously outlining his take on the correct application of the law regarding the title to territory in different stages of the Arab – Israeli conflict, and asking whether what the law prescribed was just or unjust. Prof. Weiler noted that in the instances where the law had been applied in a correct, principled and pragmatic way, a way he argued was reminiscent of Asser’s own view of legal practice, it had led to morally acceptable outcomes. However, coming back to the question of whether international law has failed, he identified an indeterminacy issue in the current legal framework of belligerent occupation that allows for manipulation by the parties to the conflict. This has turned the issue into a political dispute about the facts, for which international law can provide no more than a roadmap. 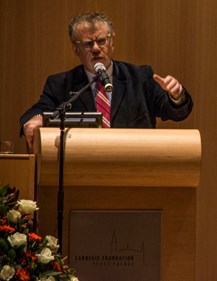 Please note that a video of the event and the written version of the lecture by Prof. Weiler will be uploaded to the Asser website.