SCL Lecture "Accountability in the war on terror?" 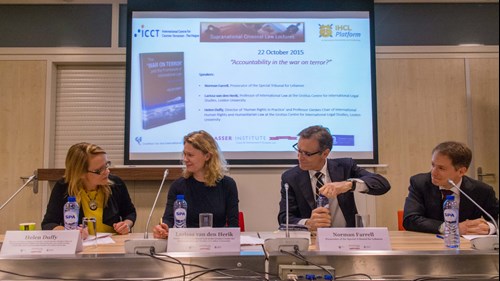 The first speaker, Mr. Norman Farrell, Prosecutor of the Special Tribunal for Lebanon (STL), related central themes in Prof. Duffy’s book to the practical experience of the STL. After words of praise for Prof. Duffy’s book, he discussed a number of issues in the book related to the legal framework regarding the criminal prosecution of terrorist acts. The book addresses the lack of a customary international law definition of the crime of terrorism, despite noting the decision of the Appeals Chamber of the STL that found that such a definition did exist, though this was unlikely to be the last word of the Tribunal on this issue. The book also raises questions as to how the elements of terrorist acts are to be defined, and points out that definitions in various conventions are incoherent and inconsistent. Mr. Farrell touched upon the role that the STL can have in shedding light on the meaning of elements of terrorism in the future. He went on to outline one of the most relevant aspects of the book from a prosecutor’s perspective which was the discussion on the modes of liability for terrorism-related offences. He highlighted some of the challenges, reflected effectively in the book, that relate to the investigation of these crimes, and noted the tension that can arise between the effective prosecution of large scale crimes and respect for fundamental rights. In accordance with the conclusions in Prof. Duffy’s book, he observed that this tension can be and has been addressed by various tribunals. He expressed the hope that STL practice could serve as an example that shows the viability of the investigation and prosecution of terrorist acts, while respecting fundamental rights. He finished his presentation by praising the book’s exceptional quality and contribution to the understanding of this developing area of law and practice.

Prof. Larissa van den Herik, Professor of International Law at the Grotius Centre for International Legal Studies of Leiden University, started off by discussing some of the ‘footprints’ of 9/11, identifying new mechanisms and ways of thinking about accountability as one of them. Accountability, she indicated, is not a purely legal concept. Accountability is pluriform and multi-dimensional and this has come out particularly in the terrorism and counter-terrorism context both regarding the actors it concerns and in the ways through which it is implemented. Prof. Van den Herik emphasised political accountability mechanisms and she also touched upon the multifold of actors that can be held accountable for actions in the terrorism and counter-terrorism context, stressing the need to not just hold the primary actors accountable, but to focus on a broader ‘web of accountability’ encapsulating also secondary actors to which unlawful acts can be attributed for instance through the concept of state complicity. She characterised accountability as a dynamic concept, coming into play not merely ex post facto but in a process-based way. This is particularly important in relation to jus ad bellum decisions, where determinations on necessity and proportionality should not only be made once at the start of operations. In this context, accountability also requires that states explain and justify their actions and decisions. Lastly, she stressed the need for courts to be conscious of their being part of a web of accountability, urging them to strategically support other accountability mechanisms when possible. Prof. Van den Herik ended her presentation by extending praise to Prof. Duffy for her contribution to the developments in the area of accountability both as a strategic litigator and as a scholar.

The last presentation was delivered by Prof. Helen Duffy, Director of ‘Human Rights in Practice’ and Professor Gieskes Chair of International Human Rights and Humanitarian Law at the Grotius Centre for International Legal Studies of Leiden University. She mainly spoke from her perspective as a lawyer representing victims of human rights violations, including in the course of the War on Terror. Like Prof. Van den Herik, she stressed the importance of a multifaceted approach to the concept of accountability in the War on Terror, taking into account the multidimensional nature of the War itself. She noted that individual criminal responsibility of the perpetrators is essential, but insufficient, and discussed the need for accountability of a range of actors - individuals, corporations, states and institutions – and in a range of forms, that include the right to truth, political accountability and guarantees of non-repetition. Prof. Duffy focused on two dimensions of accountability related to individuals, the criminal accountability for crimes committed in the course of the War on Terror and accountability in the form of reparations to victims of those crimes. She explored how we are faring in our quest for accountability in practice, illustrating the elements of these forms of accountability in practice and the challenges arising by discussing the case of one of her clients, Abu Zubaydah, the first victim of the extraordinary rendition program, and other cases. She noted that rendition crimes amount to crimes against humanity within the jurisdiction of numerous states and the ICC, but that the only person in prison is a CIA employee who leaked information concerning the programme. She discussed the lack of acknowledgement of rendition victims, and the implications of the development of categories of deserving and undeserving victims, as well as the legal and political obstacles to securing apologies and reparation in practice. She also noted momentum towards accountability in several states and positive recent developments. She concluded by making a number of comments on the role of accountability in light of the book’s conclusions, stressing that accountability in the context of the War on Terror is about restoring the rule of law and respect for fundamental principles. Most importantly, accountability should be about humanisation, restoring a culture in which human beings are treated as more than merely a means to an end.

The session ended with a lively discussion moderated by Dr. Paulussen and was followed by an informal drinks reception, offered by the International Centre for Counter-Terrorism – The Hague.