The Promise of a Global Parliament of Mayors for Global Governance

The Global Parliament of Mayors (GPM) has been launched in The Hague mid-September. An initiative of Mayor Van Aartsen and Benjamin Barber, author of If Mayors ruled the World, joined by over 60 mayors representing cities from around the world. Prof. Janne Nijman, academic director of the Asser Institute, spoke at the Panel on Governance: “The City & The Interdependent World" on the promise of the GPM for Global Governance. Watch the video for a short impression: 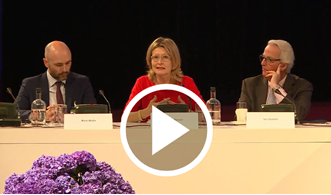 This new city network aims to enhance transnational inter-city cooperation in addressing global challenges and to facilitate and intensify cooperation between cities and the United Nations. During the inaugural meeting the mayors discussed action oriented plans concerning climate change, migration & refugees, and global democracy. The GPM has committed itself to fully support the United Nations Sustainable Development Goals, and to report on successful actions taken by cities to reach these goals in the coming years.