T.M.C. Asser Instituut Announces New President of its Governing Board

The T.M.C. Asser Instituut is delighted to announce the appointment of Professor Ernst Hirsch Ballin as the Institute’s President and a member of the Board of Directors effective as of 1 January, 2015.

Professor Hirsch Ballin replaces Professor Michiel Scheltema, who has presided over Asser’s Governing Board since 1998. 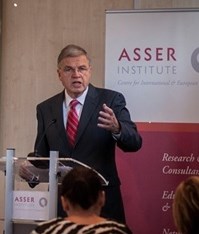 Professor Hirsch Ballin brings a wealth of relevant knowledge and experience to his new role.

He is Professor of Human Rights Law at the University of Amsterdam and Professor of Dutch and European Constitutional Law at Tilburg University and has served as the Minister of Justice in the Netherlands three times, in the period 1989 – 2010.

Professor Hirsch Ballin studied Law at the University of Amsterdam and was awarded his doctorate with ‘cum laude’ honours in 1979 with a thesis on Public Law and Policy. He has worked at the Law faculty at Tilburg University since 1 July 1981, with interruptions during periods when he held public offices. He is a former President of the Judicial Division of the Dutch Council of State. In 2006, he was elected to the Royal Netherlands Academy of Arts and Sciences. Since last year, he is also a member of the Advisory Council on International Affairs and of the Scientific Council for Government Policy.

About the T.M.C. Asser Instituut
The T.M.C. Asser Instituut (founded in 1965) is the Netherlands unique, inter-university research centre focusing on fundamental and applied research in the areas of public and private international law, European Law and International and European sports law. Core activities also include publishing, postgraduate education/ PhD candidate guidance, executive training, and knowledge dissemination and valorisation of research output on a national and international level.

Throughout the year 2015 the Institute will celebrate its 50th anniversary, notably with a series of topical symposiums, an edited volume and a stakeholder meeting at the end of the year.