Conflict in Ukraine: from outbreak to stalemate

As the Ukrainian government suspended the preparations of signing the Association Agreement with the EU on 21 November 2013, protesters took to Kyiv’s Maidan Nezalezhnosti (“Independence Square”). Initially small in scale, the protests gained momentum after violent crackdowns by riot police. Political parties opposing President Viktor Yanukovych and his ruling “Party of Regions” joined the protests. Moreover, protesters stormed and, in some cases, succeeded in capturing government buildings in the center of Ukraine’s capital.

The first deaths occurred at the end of January 2014. In total, the United Nations High Commissioner for Human Rights (UNHCHR) reported that 101 protesters and 17 members of government forces died during the Maidan events. The vast majority of these casualties happened from 18-20 February 2014, when snipers targeted the crowds in and around Maidan, while some protesters shot at law enforcement officers.

On 21 February 2014, an EU-brokered settlement was reached between the political opposition and Yanukovych, providing for a return to the 2004 constitution and early presidential elections. However, several factions within the street protesters were unsatisfied with this outcome and presented Yanukovych with an ultimatum to resign. He fled Kyiv, after which the Parliament voted to remove Yanukovych from power and appointed Oleksandr Turchynov as interim president.

Shortly after Yanukovych’s ousting, unidentified soldiers seized strategic objects and governmental buildings on Crimea - a peninsula in the Black Sea that forms part of Ukrainian territory. President Vladimir Putin of the Russian Federation later admitted these soldiers to be Russian. On 16 March 2014, a referendum was held; the results quoted 97% of the participants to be in favor of Crimea joining the Russian Federation. This referendum was contrary to the Ukrainian Constitution and a vast majority of countries in the General Assembly of the UN underscored its invalidity.

In other places in Eastern and Southern Ukraine, anti-government uprisings ensued. These framed the overthrow of Yanukovych as a “coup” and considered the end to the special status of minority languages – spoken by at least 10% of the population of a region – as discriminatory towards the Russian-speaking population of Ukraine. Acting President Turchynov vetoed this parliamentary decision.

Government buildings in several cities in East Ukraine were captured and armed groups appeared throughout the region. On 15 April 2014, acting President Turchynov deployed Ukrainian armed forces into an “Anti-Terrorist Operation”. This effectively meant the start of a war that continues today.

Separatists claimed the territories of the two most eastern oblasts (provinces) of Ukraine: Donetsk and Luhansk, collectively called the “Donbas”. After illegal referendums held on 11 May, their leaders declared the “Donetsk People’s Republic” (DPR) and the “Luhansk People’s Republic” (LPR). In reality, the territory controlled by these “republics” has always been limited to only parts of the respective provinces, including the cities Donetsk and Luhansk.  During early elections in the government-controlled areas of Ukraine on 25 May 2014, Petro Poroshenko was elected as president.

The outbreak of war

As the conflict in East Ukraine broke out, volunteer battalions assisted or substituted for regular Ukrainian government forces, diffusing the chain of command. According to Amnesty International, war crimes were committed by Ukrainian authorities and pro-Kyiv militia, as well as separatist forces. Russia has been widely accused of arming the separatists fighting in the Donbas. Moreover, Russian nationals have, from the very start of the conflict, fought alongside local rebels. However, the Russian government has persistently denied direct involvement in the armed conflict of Russian forces, claiming that Russian nationals fighting in the Donbas are volunteers.

On 17 July 2014, Malaysia Airlines flight MH17, travelling from Amsterdam to Kuala Lumpur, was hit by a missile and crashed in Donetsk Oblast. All 298 occupants of the flight were killed, of which 196 were Dutch. The Dutch-led Joint Investigation Team has deduced that the crash was caused by a Russian Buk missile launched from territory that was at that time controlled by separatists. In response to the downing of MH17, sanctions imposed by the EU and other countries on Russia after the Crimean annexation were reinforced.

The crash of MH17 was the most shocking manifestation of the flow of Russian arms onto Ukrainian territory in the summer of 2014. This flow invigorated the separatists’ efforts and allowed them to push back after a period in which Ukrainian forces regained control over big cities in the Donbas, like Slovyansk and Mariupol. Many heavy battles ensued over strategically located objects and towns, with the local population often caught in the middle.

The heavy fighting and fear of persecution has led to the forced displacement of millions of inhabitants of the Donbas and Crimea, the vast majority of whom fled in 2014. By 2020, Ukraine’s Ministry of Social Policy counted some 1.4 million Internally Displaced Persons (IDPs), while around a million Ukrainians have settled in Russia.

Attempts to end the fighting

A Special Monitoring Mission of the Organization for Security and Co-operation in Europe (OSCE) was deployed on 22 March 2014. The Mission monitors the crisis in Ukraine and facilitates dialogue between all involved parties. On 5 September 2014, a ceasefire agreement brokered by the OSCE was signed in Minsk by representatives of Ukraine, the Russian Federation, and the “LPR” and “DPR”. However, the agreement was almost immediately violated and in January 2015 it completely collapsed after a new offensive by the separatist forces to seize government-controlled areas. On 12 February 2015, the parties signed a new package of implementation measures of the Minsk agreements, brokered this time by France and Germany.

Although the Minsk agreements have systematically been violated, the line of contact has consolidated and the death toll of the war significantly decreased between February 2014 and February 2020. The UNHCHR reported a peak of 2,084 civilian deaths in 2014 (including the MH17 victims), 954 in 2015, and 27 in 2019. 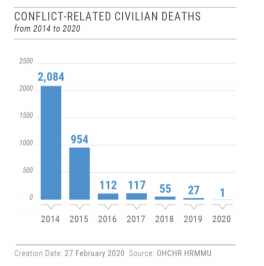 Throughout 2021, Russia undertook a major military build-up operation along the Russo-Ukrainian border. During this period, increasing tensions between Russian officials and the Ukrainian government began to emerge. Russian officials claimed that acts amounting to genocide were being perpetrated against Russian speakers in Ukraine. Further tensions arose as Russia issued demands to the United States and NATO to guarantee that Ukraine would be prevented from ever joining NATO. Russia made unspecified threats of a military response if NATO refused to withdraw its ‘aggressive line’ in Eastern Europe.

From the 17 February 2022, fighting escalated in the Donbas region of Ukraine between Ukrainian forces and Russian separatist forces.  On 21 February 2022, Putin announced that Russia recognises the independence of the DPR and LPR. On that same day, Russia deployed troops into the Donbas as a ‘peacekeeping mission’. In response, the Ukrainian parliament declared a state of emergency.

On 24 February 2022, Vladimir Putin announced that Russia would launch a “special military operation” in Ukraine. On the same day, missiles and airstrikes struck through Ukraine and were followed by a large ground invasion. In response, Ukrainian president Volodymyr Zelenskyy severed bilateral relations with Russia and enacted martial law.

This invasion has been considered a war of aggression by international organisations and states around the globe. On 1 March 2021, the United Nations General Assembly adopted a resolution deploring the Russia’s actions as an act of aggression against Ukraine. Several state delegates from across the globe addressed the Assembly declaring Russia’s acts to be in breach of international law.

The invasion has caused major suffering to the citizens of Ukraine. As of 20 March 2022, the OHCHR has recorded 2,361 civilian casualties in the country, although it is likely that the figure is much higher. Several international crimes have been occurring throughout this invasion and attempts are being made to document and verify violations as they occur. Accountability mechanisms are also being explored in a number of avenues – see Accountability for more.