Friday’s event was met with great enthusiasm from PhD researchers, students, professors, and practitioners from different corners of the country. It kicked off with a PhD Meet & Greet session followed by a Masterclass lecture. After the Masterclass, the launch of the NNHRR was officially announced. The event reached its highlight when Prof. Dr Surya Subedi delivered his lecture on the effectiveness of the UN human rights system. The lecture was followed with a reception where the guests continued their exchange.

PhD Meet & Greet
The launch event started with a 2.5-hour PhD session where more than 30 PhD researchers from various Dutch universities gathered in the same room to share their background, research projects, and expectations from the Network. Prof. Dr. Yvonne Donders, Chair of the NNHRR Steering Committee, welcomed the PhD researchers and explained the history and the function of the Network. She emphasized the Network’s added value not only in its ability to connect junior researchers but also in providing training on different aspects of human rights research.

Following the introduction by Prof. Dr Donders, the PhD researchers went around the table to meet and greet each other, introducing themselves including their research project, background, and expectations. There was a diverse mix of researchers from universities in Amsterdam, Groningen, Leiden, Maastricht, Rotterdam, and Tilburg, as well as the Asser Institute, with various backgrounds including in law, criminology, human rights, sociology, anthropology, and geography. Some researchers were immediately able to identify the commonality in their research projects and the potential to collaborate. Most researchers voiced their expectation of connecting with peers, sharing their research frustrations and experience, and receiving high-quality training on methodology. A few researchers approaching the end of their PhD research also looked forward to receiving information on funding and publishing. At the end of the Meet & Greet session, PhD researchers were also encouraged to form and join different research working groups.

PhD Masterclass
Prof. Dr Surya Subedi, Professor of International Law at the University of Leeds and former UN Special Rapporteur for Human Rights in Cambodia, then joined the PhD researchers and delivered his Masterclass. Prof. Dr Subedi focused his lecture on the following questions: is human rights universal? What’s the role between democracy and human rights? How will the shift of economic power from the West to the East impact the human rights agenda?

Prof. Dr Subedi further supported his position on the universality of human rights by arguing that the Universal Declaration of Human Rights (UDHR) had shifted from a guiding principle to a part of customary international law. He argued that many of the provisions in UDHR had acquired customary international law character through state practice. In the process of de-colonization, many new states referred to the UDHR, quoting its provisions verbatim, when drafting their constitution. This practice has effectively transformed the UDHR into a universally binding document.

Finally, Prof. Dr Subedi made reference to Asian countries and the “Asian values” to further defend the global human rights agenda. He pointed out firstly that many of Asia’s traditional beliefs and religions were in line with the core of modern human rights standards, such as the love for peace and denunciation of violence found in Buddhism. He also questioned the argument put forward by Asian politicians about the uniqueness of Asian values and quoted the example of Ghandi to argue that Asia was no different from other continents, as human rights and democracy were the core of the struggles of de-colonization in Asia. While universal compliance with human rights standards has not been reached, the human rights agenda and democracy go hand-in-hand and could not exist independently of one another.

After the lecture, the researchers engaged in further discussions with Prof. Dr Subedi on topics related to democracy and the effectiveness of the human rights monitoring system. Prof. Dr. Subedi also provided valuable insight into research methodologies based on his personal experience conducting interviews and research in countries with limited access to information. He recommended to the researchers to compensate limited information with their own judgement. At the same time, factual accuracy and objectivity should never be compromised in the research process.

Launch of the NNHRR
The launch of the Netherlands Network for Human Rights Research kicked off with words of welcome by Prof. Dr Ernst Hirsch Ballin. He elaborated on the need for a network of human rights scholars in times of swelling cynicism regarding human rights and their universal mission. There are politicians that frame human rights as an elite project, as a hurdle standing in the way of effective policies. However, according to Prof. Dr. Hirsch Ballin, the problem that Western citizens discern is the result of the seriously reduced implementation of human rights. Human rights are not just about freedom and stable living conditions, but also about life projects and the right to have a voice in the future of society. Human rights therefore remain of vital importance, and the NNHRR can be instrumental in bringing together human rights researchers and their diverse projects. Next, Prof. Dr Yvonne Donders expressed her pleasure with the launch of the NNHRR as successor to the Netherlands School of Human Rights Research. Prof. Dr. Donders described that the main aim of the Network is to associate junior and senior human rights researchers in the Netherlands, to train them, to connect human rights research and practice, and to reach out to policy makers and advocacy groups. The connection between academia and practice needs strengthening, as human rights are, for example, not very prominent on the new Dutch government’s policy agenda. The NNHRR can be a tool that constantly reminds us of human rights issues; nationally and internationally there is more than enough research to be done.

Lecture: “The Effectiveness of the UN Human Rights System: Reform and the Judicialisation of Human Rights”
Finally, Prof. Dr Surya Subedi gave a lecture in which he elaborated on the findings of his new book on the effectiveness of the UN human rights system (Routledge Publishing 2017). Prof. Dr Subedi noted that the world has changed significantly since the end of the Cold War, and yet the UN system, which is meant to monitor state compliance with human rights obligations, has not yet made the reforms necessary to grow out of this period and to respond to contemporary challenges. Most of the UN mechanisms are political bodies more so than judicial bodies, marked by the Cold War dichotomy (of which the Security Council is the prime example), which paves the way for dissatisfaction and claims of hypocrisy and double standards.

In the absence of an international judiciary mechanism, human rights have been politicized and states have often applied double standards. The weakened credibility of the international human rights system has made it easier to undermine human rights. The time has now come to address this unsatisfactory state of affairs. One possible pathway to initiate the reform that is needed, is the depoliticisation and judicialisation of the UN human rights system, which will deter authoritative figures in national governments and other places of power from committing human rights violations. A more depoliticised and judicialised UN system will also provide better and concrete legal remedies. A second pathway is to adopt a single comprehensive bill of rights – a new Universal Declaration of Human Rights or a World Charter of Human Rights. Such a new millennium charter should be a consolidated document of all human rights, including the right to property, the right to clean water, environmental rights and LGBTQ+ rights. This new bill of rights should have a robust monitoring body to replace all current ten treaty bodies tasked with the monitoring of compliance. This monitoring body should be led by people with the proper expertise and background – it should be an expert body to avoid any suggestion of hypocrisy or double standards. In addition, the new bill of rights should acknowledge that aside from national government there are other actors violating human rights on a large scale, such as multinational companies.

A third and final recommendation is that the Human Rights Council should move towards becoming an executive body, with, for example, the power to refer cases directly to the International Criminal Court and to impose economic and diplomatic sanctions on human rights violators in case of non-compliance. After the lecture came to an end, the participants continued the discussion by exchanging thoughts and ideas during the reception. The Asser Institute is honoured to have hosted this launch event, as well as to continue its role as a facilitator among universities, academics, and practitioners through the coordination and administration of the NNHRR. 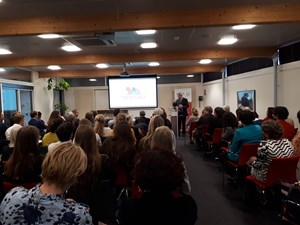