This book deals with what the author considers a sorely neglected question, namely the role of the judiciary in states' foreign policy processes. Eksteen argues that the impact of the judiciary on foreign affairs is understudied and that recognition of its role in foreign affairs is now due. This makes it a ground-breaking scholarly contribution that should first of all prove of value to students, scholars, researchers and practitioners in the two broad fields of politics and law for the wide scope of issues it covers and the very comprehensive reference lists it contains. Secondly, professionals working within politics, including members of the legislatures of the United States, the European Union and South Africa, as well as members of the judiciaries there, should find this book of benefit.

A detailed examination has been undertaken of the role of the United States Supreme Court, the two high courts in South Africa, namely the Constitutional Court and the Supreme Court of Appeal, and the European Court of Justice of the European Union, in foreign affairs. The author substantiates the unmistakable fact that these Courts have become involved in and influence foreign affairs. Furthermore, that they have not shied away from using their judicial authority when dealing with cases touching on foreign affairs and especially presidential overreach.

Specific to this book: 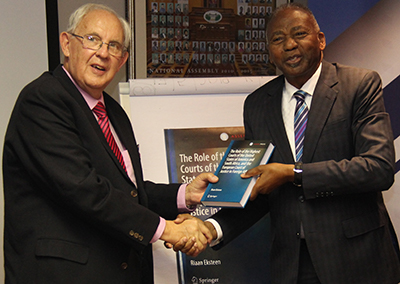 At the beginning of August, at the instigation of the author four successful book launches were held in Namibia and South Africa. In the above picture the author, Dr Riaan Eksteen, can be seen presenting a copy of his book to the Hon. Dr Peter Katjavivi, Speaker of Namibia’s National Assembly, during the presentation of the book in Windhoek, Namibia, on 9 August 2019.

Excerpt from a review of the book:

Overall, this is a well-organized book with a clear focus on research questions. The three cases examined, with their similarities, but mainly their differences, are typical examples geographically and politically. The author's multifaceted experience in foreign policy, having served as Ambassador of South Africa, in important positions worldwide, combined with his legal and political academic expertise are the guarantee for a successful analysis of the subject matter in the book. Through very rich case law, the reader is given the opportunity to immerse himself in the role of the supreme courts in important political situations regarding foreign policy.
- Dr. Konstantinos Margaritis (Adjunct Academic at the Hellenic Open University, Member of the Board of Directors of the Greek Public Law Association, Attorney at Law), Book Review in Greek Journal Public Law Journal, Vol. 5, Issue 3-4, 2020, pp. 302-303, published by the Greek Public Law Association