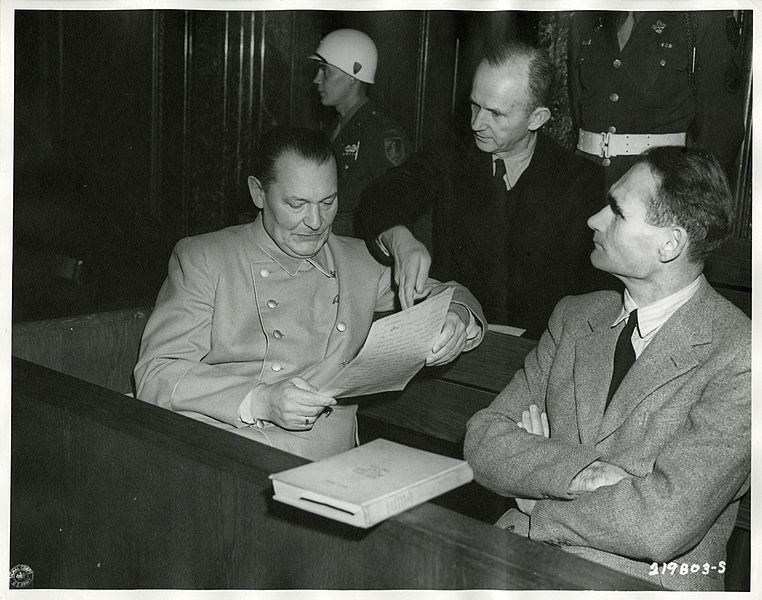 Aggression in its essence has been defined as “state conduct that either initiates war against another state or brings about a situation in which the victim is (or may be) driven to war”, see para. 1 of this piece. Up until the early 20th century the waging of war was not prohibited under international law and states could use war as a legitimate political instrument.[1] The Covenant of the League of Nations of 1919 signifies a shift, in which the member states obliged themselves (see article 10 of the Covenant) “to respect and preserve as against external aggression the territorial integrity and existing political independence of all Members of the League.” In the Kellogg-Briand Pact of 1928, war as an instrument of national policy was generally abandoned, see again this piece.

The aforementioned provisions all relate to state conduct. Therefore, states would be held accountable for a violation. Aggression was first recognized as an international crime resulting in individual criminal liability under international law in the Charter of the International Military Tribunal at Nuremberg (IMT).[2] Its Article 6 (a) gave the IMT jurisdiction over crimes against peace, “namely, planning, preparation, initiation or waging of a war of aggression, or war in violation of international treaties, agreements or assurances, or preparation in a common plan or conspiracy for the accomplishment of any of the foregoing.” This wording is duplicated in article 5 (a) of the Tokyo Charter. The IMT in its judgment of 1946 stated that the crime of aggression “[…] is the supreme international crime differing only from other war crimes in that it contains within itself the accumulated evil of the whole.”

The definition of aggression, as found in article 6 (a) of the IMT, was generally endorsed by the members of the UN General Assembly (GA) in the immediate aftermath of the second World War.[3] However, in the years that followed, the discussions in the UN War Commission showed that there was no overall consensus that there existed a crime of aggression under international law.[4]A step in that direction was taken in 1974 with the UN General Assembly’s adoption of Resolution 3314 (XXIX) on the Definition of Aggression, see p. 7 of this paper. Article 1 of the Annex defines aggression as: “the use of armed force by a state against the sovereignty, territorial integrity or political independence of another state, or in any other manner inconsistent with the Charter of the United Nations, as set out in this Definition.”

Article 4 of the Annex shows that this list is not exhaustive and that the UN “Security Council may determine that other acts constitute aggression under the provisions of the Charter.”

The crime of aggression and the International Criminal Court

Under the new article 8 bis (1) the crime of aggression consists of: “the planning, preparation, initiation or execution by a person in a position effectively to exercise control over or to direct the political or military action of a State, of an act of an aggression which, by its character, gravity and scale, constitutes a manifest violation of the Charter of the United Nations,” see p. 18 of the RC/Res. 6 Annex I Amendments to the Rome Statute of the International Criminal Court on the Crime of Aggression (11 June 2010).

The article’s second paragraph defines the act of aggression as: “the use of armed force by a state against the sovereignty, territorial integrity or political independence of another state, or in any manner inconsistent with the Charter of the United Nations.” The article then lists the same acts as the UN General Assembly’s resolution 3314 (XXIX) which qualify as acts of aggression, and equates all acts violating article 2 (4) of the UN Charter and Resolution 3314 with a crime of aggression as long as they form a “manifest” violation of the Charter, see p. 14 of this paper.

The crime of aggression is a leadership crime. A suspect must be in a position to “effectively exercise control over or to direct the political or military action of a state.” It has been argued that this excludes non-governmental actors such as organized armed groups involved in armed conflicts and private economic actors.[6]

The Kampala amendments will enter into force for those state parties that have accepted them one year after the deposit of their instrument of ratification or acceptance.[7] For the ICC to actually exercise jurisdiction over the crime of aggression two other conditions need to be fulfilled: firstly, the alleged crime must have occurred more than one year after thirty states have ratified or accepted the amendments, see p. 16 of this paper. Secondly, after 1 January 2017 a decision must be taken by a two-thirds majority of the Assembly of State Parties granting the ICC approval to exercise jurisdiction over the crime of aggression, see pp. 16-17 of the same paper.

When the above mentioned requirements are fulfilled, the jurisdiction of the ICC is ‘activated’. In the situation of a UN Security Council referral, the same procedural conditions are applicable.[8]

However, in the situation where an investigation is started on the basis of the initiative of the Prosecutor (proprio motu) or after referral by a State Party, the procedural conditions for jurisdiction are slightly different.[9] In those cases, the Court may only exercise jurisdiction over an act of aggression committed by a state party, unless that state party has previously made a declaration that it does not accept such jurisdiction.[10] This means that no jurisdiction exists for the crime of aggression with respect to Non-State parties and State parties that have opted-out. In addition, one of the two states involved must have ratified the amendment, see this website.

Six months after ascertaining inaction by the Council, the Prosecutor will go to the Pre-Trial Division and have to convince four judges to allow him to proceed with the aggression investigation. The Pre-Trial Division will no doubt take judicial notice of, and accord significant evidentiary weight to, the fact that the Security Council declined to either refer the situation itself or to make the necessary aggression determination.[13]

On 15 December 2017, the Assembly of States Parties activated the ICC’s jurisdiction over the crime of aggression.

Examples of trials against perpetrators of the crime of aggression can be found in the jurisprudence of the Nuremberg and Tokyo Tribunals. Rudolf Hess was the only Nuremberg defendant who was convicted exclusively on account of crimes against the peace, while 11 other defendants, including Hermann Göring, were sentenced for crimes against peace and traditional war crimes, see para. 3 of this piece. The International Military Tribunal for the Far East convicted 23 defendants, amongst them Hideki Tōjō, for the waging of aggressive war, see para. 4 of the same piece. (For an overview of persons convicted for the crime of aggression, see this website.)

Since 1946 there have been no domestic or international trials for alleged crimes of aggression, although the Security Council has on occasion determined that acts of aggression were committed by for example South Africa and Israel.[14]

Wikipedia: People Convicted for the Crime of Aggression

Dapo Akande, What Exactly was Agreed in Kampala on the Crime of Aggression? EJIL Talk! Blog, 21 June 2010.

[3] In 1946 the General Assembly of the UN adopted resolution 95 (I) in which it affirmed the “principles of international law recognized by the Charter of the Nuremberg Tribunal and the judgment of the Tribunal”. See, Antonio Cassese, International Criminal Law, Oxford University Press (2003) p. 111.

[5] Art. 5 (2): “The Court shall exercise jurisdiction over the crime of aggression once a provision is adopted in accordance with articles 121 and 123 defining the crime and setting out the conditions under which the Court shall exercise jurisdiction with respect to this crime. Such a provision shall be consistent with the relevant provisions of the Charter of the United Nations.”

[7] See art. 15ter of the Amendments in combination with art. 121(5) of the Rome Statute. For the status of ratification and implementation of the Kampala amendments see: http://crimeofaggression.info/the-role-of-states/status-of-ratification-and-implementation/

[8] Art. 15 ter in conjunction with art. 13 (b) Rome Statute; William A. Schabas, The Result: Prosecuting Aggression at the International Criminal Court, 12 June 2010. Available at: http://iccreviewconference.blogspot.nl/2010/06/result-prosecuting-aggression-at.html