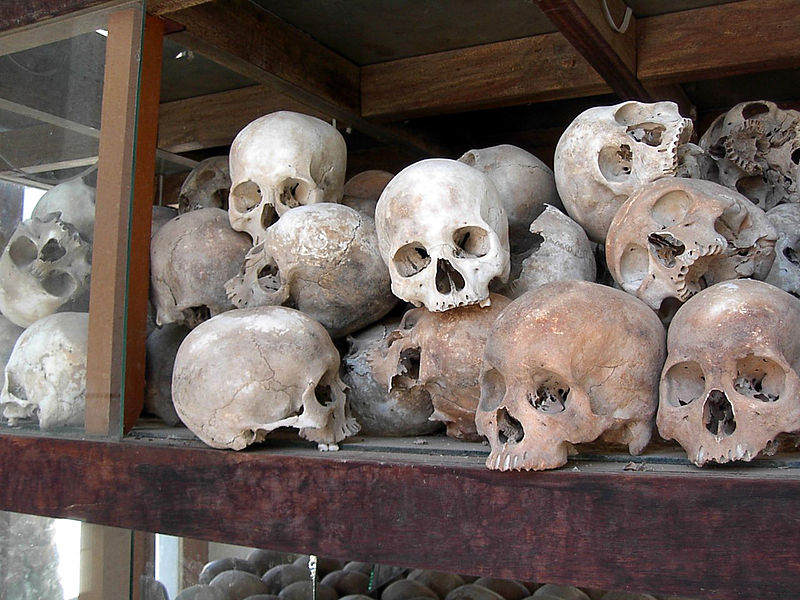 The phrase ‘crimes against humanity’ was first employed internationally in a 1915 declaration by the governments of Great Britain, France and Russia which condemned the Turkish government for the alleged massacres of Armenians as “crimes against humanity and civilization for which all the members of the Turkish Government will be held responsible together with its agents implicated in the massacres”, see p. 5 of this contribution.

…murder, extermination, enslavement, deportation, and other inhumane acts committed against any civilian population, before or during the war, or prosecutions on political, racial or religious grounds in execution or in connection with any crime within the jurisdiction of the Tribunal, whether or not in violation of the domestic law of the country where perpetrated.

The Tokyo Charter of 1946, establishing the International Military Tribunal for the Far East, incorporated the same definition of crimes against humanity.

After the Nuremberg and Tokyo trials of 1945-1946, the next international tribunal with jurisdiction over crimes against humanity would not be established for another five decades. However, work continued on developing the definition of crimes against humanity. In 1947, the International Law Commission was charged by the United Nations General Assembly with the formulation of the principles of international law recognized and reinforced in the Nuremberg Charter and judgment, and with drafting a ‘code of offenses against the peace and security of mankind’. Completed fifty years later in 1996, the Draft Code defined crimes against humanity as various inhumane acts, i.e., murder, extermination, torture, enslavement, persecution on political, racial, religious or ethnic grounds, institutionalized discrimination, arbitrary deportation or forcible transfer of population, arbitrary imprisonment, rape, enforced prostitution and other inhuman acts committed in a systematic manner or on a large scale and instigated or directed by a Government or by any organization or group.

This definition differs from the one used in Nuremberg above, where the criminal acts were to have been committed “before or during the war”, thus establishing a nexus between crimes against humanity and armed conflict.

In 1994, the UN Security Council established the International Criminal Tribunal for Rwanda (ICTR), pursuant to the genocide that had taken place from April – July 1994. In the ICTR Statute, the linkage between crimes against humanity and an armed conflict of any kind was dropped. Rather, the requirement was added that the inhumane acts must be part of a “systematic or widespread attack against any civilian population on national, political, ethnic, racial or religious grounds”, see Article 3 of the ICTR Statute. Because of the internal nature of the conflict in Rwanda, crimes against humanity would likely not have been applicable if the nexus to armed conflict had been maintained.[2]

The International Criminal Court and the Rome Statute:

For the purpose of this Statute, ‘crime against humanity’ means any of the following acts when committed as part of a widespread or systematic attack directed against any civilian population, with knowledge of the attack:

(e) Imprisonment or other severe deprivation of physical liberty in violation of fundamental rules of international law;

(h) Persecution against any identifiable group or collectivity on political, racial, national, ethnic, cultural, religious, gender as defined in paragraph 3, or other grounds that are universally recognized as impermissible under international law, in connection with any act referred to in this paragraph or any crime within the jurisdiction of the Court;

(i) Enforced disappearance of persons;

(j) The crime of apartheid;

(k) Other inhumane acts of a similar character intentionally causing great suffering, or serious injury to body or to mental or physical health.

Essentially, the Rome Statute employs the same definition of crimes against humanity that the ICTR does, minus the requirement that the attack was carried out ‘on national, political, ethnic, racial or religious grounds’. In addition, the Rome Statute definition offers the most expansive list of specific criminal acts that may constitute crimes against humanity to date.

Professor Cherif Bassiouni has repeatedly pointed to the need for a specialized convention on crimes against humanity, and has argued that the existence of various similar but nonetheless different definitions of crimes against humanity reflects a weakness in customary international law, and is problematic in light of the principles of legality in international criminal law, see p. 583 of this article. For instance, the maxim nullum crimen sine lege, a fundamental principle of international criminal law, dictates that an individual can only be convicted for specific acts which, at the time of commission, were known to be criminal.

Fundamentally, crimes against humanity are inhumane acts – which would constitute crimes in most of the world’s national criminal law systems – committed as part of a widespread or systematic attack against civilians, see p. 3 of this contribution. This connection to a broader or systematic attack is what justifies the exercise of international criminal jurisdiction. Though the exact wordings of the definitions of crimes against humanity differ, each definition is made up of the underlying criminal elements (e.g., murder, extermination, rape and so forth) as well the contextual elements or ‘chapeau’ under which the criminal act must have been committed, i.e., the defendant must know that he or she is contributing to a widespread or systematic attack against civilians, see the same page of the just-mentioned contribution.

Charter of the International Military Tribunal (IMT) at Nuremberg

Statute of the International Criminal Tribunal for Rwanda

Statute of the International Criminal Tribunal for Yugoslavia

The Crimes against Humanity Initiative, launched in 2008 to study the need for a comprehensive convention on the prevention and punishment of crimes against humanity, analyzes the necessary elements of such a convention, and drafts a proposed treaty.

[1] Bassiouni has argued that this definition was necessary as the conflict in the former Yugoslavia was considered a conflict of both an international and non-international nature. Therefore, this adjusted definition of crimes against humanity was necessary to afford the tribunal jurisdiction over this crime. See: Cherif Bassiouni, M. Crimes against Humanity: Historical Evolution and Contemporary Application. Cambridge: Cambridge University Press, 2011. p. 186.

[3] Article 10 of the Rome Statute states: “Nothing in this Part shall be interpreted as limiting or prejudicing in any way existing or developing rules of international law for purposes other than this Statute.”  See also p. 2 of this contribution.