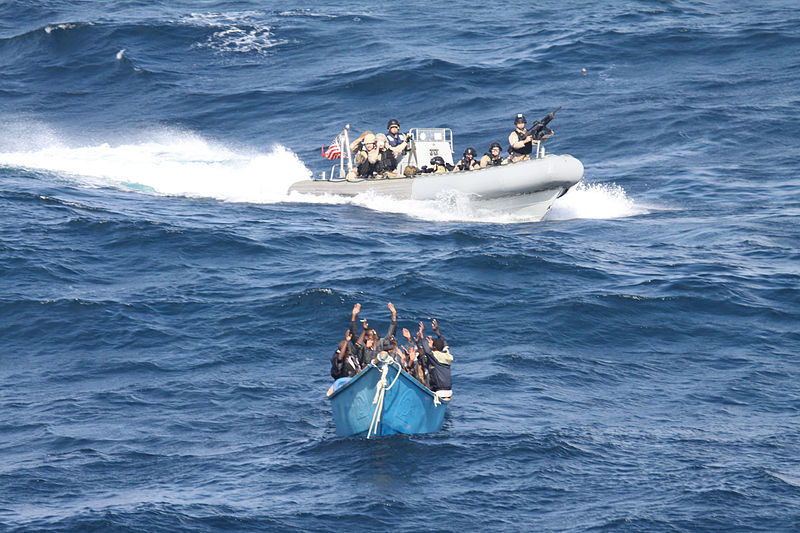 The word pirate is derived from the Greek word peirates, referring to an adventurer who attacks a ship.[1]

In the ancient Mediterranean, piracy was often closely related to maritime commerce, practiced both by the Phoenicians, the Greeks, the Romans, and the Carthaginians. In the Middle Ages, Vikings from the north and Moors from the south also engaged in piracy. Although acts of piracy declined dramatically in the 19th century, since 2008, an increase in pirate activities in the Gulf of Aden has once more drawn the international community’s attention to piracy and armed robbery at sea.[2] Even though the number of pirates has increased, due to the efforts of the international community, piracy attacks have decreased in number.

In Article 101 of the 1982 UN Convention on the Law of the Sea, which has currently 168 States Parties, one can read:

Piracy consists of any of the following acts:

(a) any illegal acts of violence or detention, or any act of depredation, committed for private ends by the crew or the passengers of a private ship or a private aircraft, and directed:

(ii) against a ship, aircraft, persons or property in a place outside the jurisdiction of any State;

(b) any act of voluntary participation in the operation of a ship or of an aircraft with knowledge of facts making it a pirate ship or aircraft;

(c) any act of inciting or of intentionally facilitating an act described in subparagraph (a) or (b).

This definition is almost the same as the one that can be found in Articles 14-22 of the 1958 Convention on the High Seas. As almost all states are party to at least one of these two instruments, this definition can be said to be generally accepted (see p. 11 of this document). For the sake of completeness, it should be noted that armed robbery at sea (see supra) is not exactly the same as piracy. Indeed, armed robbery at sea covers activities akin to piracy, but it is carried out not on the high seas, but in a state’s territorial waters (see p. 12, n, 40 of this document).

Pirates have long been seen as hostes humani generis: the enemies of humankind.[3] Already in the year 1624, Hugo de Groot concluded that those who commit these crimes, should be extradited or punished, aut dedere aut punire.[4] These principles are still repeated in modern times, for example, by Oppenheim: “[T]he pirate is considered the enemy of every state, and can be brought to justice anywhere.”[5] According to the authors of the report Counterpiracy under International Law (see p. 23), “states have agreed that each state will have jurisdiction over piracy committed on the high seas, while the same acts committed in territorial waters will not attract such universal jurisdiction.” Indeed, piracy is the classic example of a crime subject to universal jurisdiction, meaning that states can (note that there is no obligation here) exercise jurisdiction over pirates, even without a clear link with the prosecuting states, such as territoriality and the active/passive nationality principle. Jurisdiction based on the universality principle is thus based on the idea that the crime is so serious that any state has an interest in prosecuting it. For instance, on 18 October 2012, the Kenyan Court of Appeal in Nairobi held that Kenyan courts have universal jurisdiction, explaining:

the offence of piracy on the coast of Somalia, which we are dealing with in this appeal, is of great concern to the international community as it has affected the economic activities and thus the economic well being of many countries including Kenya. All States, not necessarily those affected by it, have therefore a right to exercise universal jurisdiction to punish the offence.

Indeed, modern piracy, according to the UN Division for Ocean Affairs and the Law of the Sea,

[t]hreaten[s] maritime security by endangering, in particular, the welfare of seafarers and the security of navigation and commerce. These criminal acts may result in the loss of life, physical harm or hostage-taking of seafarers, significant disruptions to commerce and navigation, financial losses to ship-owners, increased insurance premiums and security costs, increased costs to consumers and producers, and damage to the marine environment.

For this reason it has been a topic of concern at the international level. The United Nations Security Council has issued many resolutions under Chapter VII of the UN Charter on the suppression of piracy,[6] and several multinational military operations are fighting piracy in the Gulf of Aden, such as the European Union with the EUNAVFOR, conduction operation ATALANTA, and NATO, conducting operation Ocean Shield.

The United Nations Office on Drugs and Crime (UNODC) is also supporting counter-piracy efforts in six states located near the ‘pirate-habitat’ Somali Basin region (Kenya, Seychelles, Mauritius, Tanzania, Maldives and Somalia) in order to detain and prosecute piracy suspects according to international standards of rule of law and respect for human rights. As on July 2012, 633 suspects of piracy stand, or stood trial in that region, see p. 16 of this document. Interesting to mention is that that states have also concluded transfer agreements, which “occur between a state in the region that has criminalized piracy under its national legislation and is willing to prosecute suspected pirates [such as Kenya], and states from outside the region or other organizations involved in counterpiracy operations [such as the EU],” see p. 49 of this report.

Furthermore, piracy trials have taken place in the United Arabic Emirates, Oman, Yemen, Madagascar, the Maldives, India, Malaysia, the Republic of Korea, Japan, the United States of America, Spain, France, Italy, Germany, and the Netherlands, see p. 16 of this brochure. The Netherlands was the first European country that decided to prosecute Somali pirates, after pirates attempted to hijack the MS Samanyolu on 2 January 2009 in the waters of Somalia.[9] They were initially captured by the Danish navy, but transferred to the Dutch authorities because the Samanyolu was sailing under the Netherlands Antilles flag and because the Netherlands was prepared to prosecute the suspects. On 17 June 2010, the District Court of Rotterdam found five Somali pirates guilty of piracy, sentencing each of the men to five years’ imprisonment.

[8] By 23 March 2012, the UN Secretary General Ban Ki-Moon reported to the Security Council a compilation of information received from 42 Member States on measures they have taken to criminalize piracy under their domestic law, see letter dated 23 March 2012 from the Secretary-General to the President of the Security Council, S/2012/177. Available at: http://undocs.org/S/2012/177.