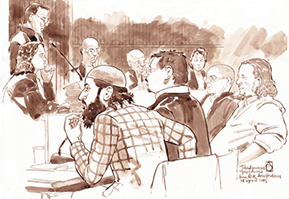 Often, the topic of foreign fighters is looked at from a (limited) counter-terrorism perspective only. In those cases, the object is not foreign fighters as such, but foreign terrorist fighters. This term has been defined in several ways, but the most authoritative one can be found in UN Security Council Resolution 2178 of September 2014, which refers to “individuals who travel to a State other than their States of residence or nationality for the purpose of the perpetration, planning, or preparation of, or participation in, terrorist acts or the providing or receiving of terrorist training, including in connection with armed conflict”.

This page will collect cases of (individuals related to) (potential) foreign fighters as such, whether the suspects are charged with terrorism-related crimes (which admittedly will often be the case, which justifies placing it under the LACT page), war crimes or any other crimes.

Through the analysis of these cases, policy makers, practitioners and scholars alike will get a better insight into how (individuals related to) (potential) foreign fighters are prosecuted and which lessons learned can be distilled from these prosecutions. These lessons will be incorporated in papers.

The first paper, based in part on the ICD case summaries, as well as other sources, is entitled ‘Prosecuting (Potential) Foreign Fighters: Legislative and Practical Challenges’ and is authored by Christophe Paulussen and Kate Pitcher. It can be found here.

The second paper is entitled ‘The Prosecution of Foreign Fighters in Western Europe: The Difficult Relationship between Counter-Terrorism and International Humanitarian Law’ and is authored by Hanne Cuyckens and Christophe Paulussen. It can be found here. An ICCT Perspective on the same topic, entitled ‘The Prosecution of Foreign Fighters under International Humanitarian Law: Misconceptions and Opportunities’ and authored by Christophe Paulussen, Hanne Cuyckens and Katharine Fortin, can be found here.

On the ICD website you can find an overview of cases related to Foreign Fighters.