About 10% of Hong Kong’s workforce is made up of foreign domestic workers. Foreign domestic workers, of which the majority are women from Southeast Asian and South Asian countries, are granted two-year visas that restrict them to work as private household workers. Hong Kong households are only eligible to employ a domestic worker when they meet a minimum income level and can house the worker in their own home. The latter requirement depicts a certain tension. Due to Hong Kong’s tight housing market and relatively small apartments, workers are often provided with inadequate housing and little to no private space. As a reaction, many civil society organisations, a handful of Hong Kong legislators and the UN Human Rights Council condemn this so called ‘live-in rule’. Simultaneously, other Hong Kong legislators claimed that foreign domestic workers make ‘too much’ use of Hong Kong’s public space, which compromises the rights of Hongkongers.

The live-in rule is discussed in almost every review process of the international human rights conventions that are extended to Hong Kong. The live-in rule raises concerns on the lack of privacy, lengthy working hours and the heightened risk of workers being stuck in exploitative or abusive environments. Hong Kong has been asked multiple times to review this rule, but Hong Kong’s government seems persistent: “The live-in requirement forms the cornerstone of Hong Kong’s policy of importing Foreign Domestic Helpers’’, the Hong Kong representative said, in the opening remarks at the UN Committee on the Elimination of Racial Discrimination (August 2018). ‘’It has been our established policy that, as in many other jurisdictions in the world, priority in employment should be given to the local workforce, and importation of workers should only be allowed where there is confirmed manpower shortage in a particular trade that cannot be filled by local workers. In accordance with this principle, Foreign Domestic Helpers have been imported since the early 1970s to meet the shortfall of local live-in domestic workers. The international community’s concerns on privacy and safety of the domestic workers are not addressed. 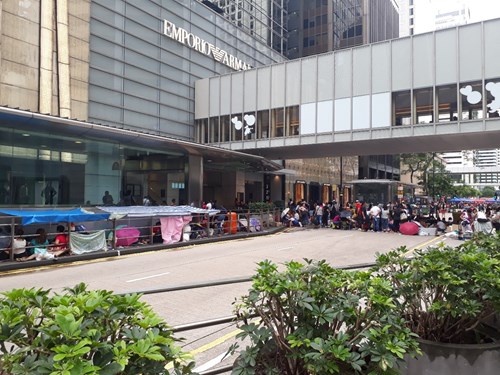 On Sundays, foreign domestic workers have their only mandatory day off.  Because of their lack of private space, they scatter over the city’s parks, walkways and roofed corners. Since Sunday is the only day on which they are able to meet each other, the workers take care of personal errands and organise events, resulting in certain areas of the city being fully occupied. Victoria Park, one of Hong Kong’s biggest parks, is the place where Indonesian workers meet, while most Filipinas gather on the streets of the Central shopping district. Some shopping malls are exclusively filled with shops selling food from workers’ countries of origin, international package delivery services and money transfer facilities. Some legislators have made critical comments about this practice. In May 2018 a legislator expressed worries about the large number of domestic workers that congregate in public space, thereby “affecting the daily lives of the public, the operation of shops and the environmental hygiene in public places. The problem has persisted for many years and shows a worsening trend”. The legislator asks the Hong Kong government to provide centres where domestic workers can congregate, in order to “balance the rights of both Foreign Domestic Helpers and members of the public to use public places”.