Who looks after the Jewish heritage of Lviv?

In Lviv, Ukraine, previously called Lwów under Polish rule until 1939, or Lemberg under the Austro-Hungarian Empire, stood at least 44 synagogues. Only two have survived the Second World War. One owes its survival to a life as a stable under the Nazis; its recently renovated interior shows pink walls with scenes from the Bible, animals and other. The murals were painted in the 1920s when the synagogue was built and Jewish life in Poland was in full bloom. An old man lets us in. In the corner stands a bookcase filled with prayer books in Ukrainian or Russian, and Hebrew. Although a mess inside, the temple looks active. There is a children’s toy phone lying on one of the benches next to some prayer books. In the corner, tables are set up in preparation for what looks like a festive meal. Later, we learn that it was the Bais Aron V’Yisroel synagogue built in 1924, designed by architect Aba Kornbluth and now led by Rabbi Mordechai Shlomo Bald. It is currently the only active synagogue in Lviv, a city of which one third of its population before 1940 was Jewish. One of these Jews was the grandfather of my travel companion and love. His grandfather’s father ran a well-known bookstore in what was then still Lwów. At present, the once Jewish streets of Lviv are shrouded in shadow. 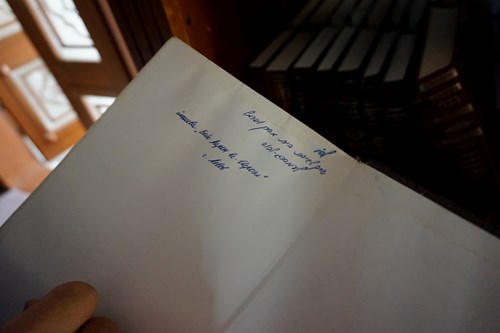 Lemberg and Lwów mentioned side by side inside a prayer book

With almost all synagogues in Lviv destroyed, most of the former holy sites reveal no trace of the past. Children are playing in playgrounds erected on the exact spots where synagogues stood. However, many of the city’s walls bare traces of Polish and Hebrew; names of Jewish stores, products such as hats, shoes or dairy. Rectangular holes in doorposts where a mezuzah[1] used to be. On the square next to a touristy “Jewish” restaurant where you can eat Ashkenazi Jewish[2] style dishes and then haggle about the price instead of paying a fixed amount, perhaps an ‘innocent’ idea, but none-the-less following an anti-Semitic stereotype; are the ruins of a small synagogue; the Golden Rose synagogue built in 1571. Besides it, a monument was erected just a few years ago to commemorate the Second World War including the loss of almost the entire Jewish population of the city. The monument is a collection of heavy stones inscribed with quotes about the city’s Jewish past, in particular the war years. 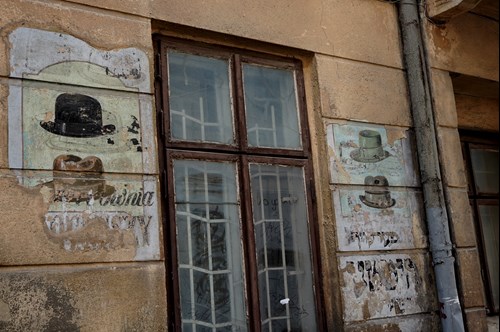 The walls of the city still bare traces of a Polish Jewish past.

After the War, only a handful of people returned to their home towns, cities or villages in former Poland. Some people, like Polish Jews returning to Kielce came face to face with another pogrom, killing 41 people and wounding 82 of the 200 people who returned to their homes after surviving the camps and five years of war. A recent American survey shows that 41 percent of American adults do not know what Auschwitz was. One wonders what a similar survey in Ukraine would reveal, as education on the country’s Jewish past and the Shoah [3] is almost absent, leading to the disappearance of knowledge about Polish and Ukrainian Jews. We looked hard for a Jewish museum in the city that was the third large Jewish center in former Poland with between 110,000 and 150,000 Jewish inhabitants in the 1930s, but could not find one. Who will look after the Jewish heritage of Lviv and other important centers of Jewish history? The stories are right there, just underneath the surface, they just need listeners. 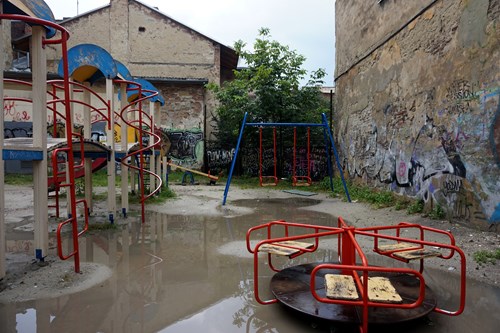 One of the playgrounds that cover up part of Jewish history.

[1] A mezuzah, or little scroll of parchment in a case, is hung by religious Jews- as well as by many secular ones- next to the doors of the house. ‘Mezuzah’ literally means ‘doorpost’, and is seen as protecting the home and those who enter it.

[2] Ashkenazim is commonly used for Jews originating roughly from Western, Central and Eastern Europe - in contrast to Sephardim, who originally came from Portugal and Spain, and Mizrachim or Middle Eastern Jews. Individuals from these groups had and sometimes still have different customs, rituals, languages and culture.

[3] Synonym for the Holocaust