In an early article, Alvin Thompson argues that the major prejudices that Europeans in the Americas held against blacks/Africans originated prior to 1600, so that when the transatlantic slave trade expanded, ‘there was already a solid body of prejudicial literature in Europe, which could be exploited to “justify” this trade.’ It begins when the Flood subsides. Noah plants a vineyard, makes wine, and falls into a stupor in his tent. Ham . . . sees his father's nakedness and tells his two brothers what has happened.... When Noah wakes up and learns what has happened he lays a curse not upon Ham but upon Ham's son: "Accursed be Canaan. He shall be his brothers' meanest slave." . . . Whizzing forward to the medieval versions we learn more about the nature of Ham's misdeeds. He mocked Noah's nakedness, and invited his brothers to do the same (which they refused). What is more, this is not the first of Ham's transgressions. When they had all been on the Ark together, Noah had insisted that everyone be sexually continent, but Ham, by the aid of a magic demon, slept with his wife. Next day Noah saw his foot- prints, and there grew up an enmity between Noah and his son. Ham was punished by being given a black skin. When the world came to be divided up, Japheth received Europe, Shem got Asia, and Ham was awarded Africa. 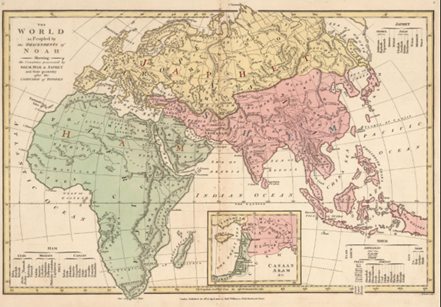 An analysis of the conceptions of the “Curse of Ḥam” among pre-Expulsion Sephardic Jews unveils the development of the myth shrouded in mystery. According to Benjamin Braude (1997), the initial construction of the destructive image of dark-skinned Africans in medieval Europe lies with the Portuguese explorers during the time of King Henry the Navigator (1415-1460). He argues that before that time, the connection between black Africans and the biblical son of Ḥam was not always made. He posits that the interpretation and the ambiguities of talmudic, exegetical Jewish texts, and non-Jewish texts, played a role in inventing tradition. In addition, David H. Aaron (1995) maintains:

In assessing the impact of these isolated passages, we have not established evidence for centuries of a Jewish Hamitic myth, for the existence of such a "myth" can only be derived from sources subsequent to the midrash that would reflect this early exegesis. Indeed, what should impress the reader with regard to the ancient material is the relative paucity of sources reflecting this motif and the impoverished development.

The midrash [Exegesis of the Hebrew Bible] which he refers to is the Tanḥuma:

...as for Ham, because he saw with his eyes the nakedness of his father, his eyes became red: and because he spoke with his mouth, his lips became crooked [qumoth] and because he turned his face the hair of his head and his beard became singed [nitḥarek] and because he did not cover his [father's] nakedness, he went naked and his prepuce became stretched, [all this] because all of God’s retributions are commensurate to a transgression. Even though this was the case, the Holy One Blessed be He, returned and had mercy on him, for his mercy extends to all his creations.

Remarkably, this midrash challenges the idea of eternal damnation of any sort, since God applies mercy to Ḥam. Furthermore, Jonathan Schorsch states that the New World and Old World slavery reworked the ideological mechanisms to justify slavery. He explains how this was done through the biblical commentaries of Radak (1160–1235) and Abarbanel (1437–1508). These two Sephardic commentators parallel the “curses of Ḥam” and the Kushites [Descendants of the biblical Kush, son of the biblical Ḥam] as perpetual in nature, hence condemning them to eternal enslavement. Schorsch argues that medieval Jewish sources applied the curse of the biblical Canaan to all of Ḥam’s descendants. The sum of the matter is that scholars agree that the myth of the “Curse of Ḥam” did not always exist, but reflects an amalgamation of ideas and interpretations of Jewish texts between the eleventh and eighteenth centuries.