In 1734, an Amsterdammer had to sell part of his stately canal house on the Nieuwe Herengracht, number 143. His son-in-law had gambled away a hundred thousand guilders, nearly their whole family fortune, in one crazy night. Jacob Abrabanel, the owner of the house, was a member of the Portuguese Jewish community in Amsterdam, as his family had been for over a hundred years. In 1720, Abrabanel had bought the four plots on the canal that made up the expansive complex still standing today. The large part in the middle was destined for him, the two smaller side houses for his daughters Ribca and Simcha and their husbands, sons of Jacob’s brother.

A hundred years prior to this moment, in September 1624, a testament was signed by another Abrabanel in Amsterdam, including his two daughters, Ester and Rachel. These girls were the ancestors of Ribca and Simcha who would later come to live on the Nieuwe Herengracht. In 1624, the Sephardic community of Amsterdam had slowly gained acceptance in a more public manner, the three synagogues belonging to distinct religious congregations until their unification in 1639 were well-known, even abroad. However, the community was transitioning still from Catholic Spain and Portugal to Calvinist Holland and drifting between insider and outsider. The ground they stood on might have felt more wobbly to them than the one in 1720. Nevertheless, elite members from the Portuguese Nation, a minority group, such as the Abrabanels, were excellent at adjusting to their surroundings like chameleons.

On the 10th of April 1720, Jacob Abrabanel signed the instrument with regard to the purchase of the plots to build his houses on with Notary van Achthoven. Abrabanel was planning. The big house would have at least five toilets, the little houses one each. The sewer would be modern as well, constructed of stone, not wood, and there would be a large kettle in the big house providing hot water at all times. On the first floor of his living quarters, the white stucco ceiling covered with putti and floral elements was designed by Dutch artist Jan van Logteren. The walls of this room were purple and red in colour, all according to the latest fashion in the style of Louis XIV, moving into the rococo era. Around the corner of the house stood, and still stands, the great Esnoga, the large Portuguese synagogue built in 1675. Jacob Abrabanel would be able to walk there on Shabbat if he wanted to. The neighbourhood was full of acquaintances and family members of the community, and the house would be a prestigious and noticeable fort where the family would be safe and comfortable, more than comfortable, if not for the great catastrophe of 1734. The house was sold to an acquaintance from the Portuguese community and later again and again. 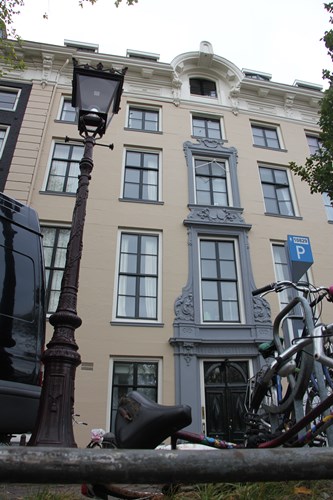 Standing in front of the house today, three hundred years after it was built, I think of the saying that survived amongst some Sephardim: Ya basta mi nombre ke es Abravanel. It is enough that my name is Abravanel. The name tells the story, a family with an elite reputation. The house has had many inhabitants, was squatted in 1980 and is now owned by the municipality who rents it out in units for communal living. Until 1806, different Jewish families lived in this house, but does that make it Jewish heritage? Would the house have shown signs of “Jewishness” in a religious or cultural sense? It is unclear. The interior, at least, seems to have been simply a modern one, even more French than Portuguese or Spanish. They were chameleons, these Abravanels, trying to live their time, their context and their surroundings, with an identity that was as in motion as their home. They would have overlooked vast fields of nothingness, apart from a few gardens, as most of the surroundings were not yet inhabited. A new neighbourhood. Now, opposite the house stands the Wertheimpark, the oldest park of Amsterdam. It was a gift from the city to Napoleon in the year 1812, named after another Amsterdam Jew in 1898, in yet another time and coming from a different community. Two historical figures, Abravanel and Wertheim, now side by side in modern Amsterdam.