In January 1579, a number of Dutch provinces signed the Union of Utrecht in which they agreed to cooperate in the strife against the Spaniards. Some historians have regarded the Union as the first constitution of the Netherlands. The document stipulated that no one could be prosecuted because of his or her religion, but at the same time, only one religion was publicly allowed in Holland, Protestantism. In that landscape, Sephardim started to arrive from Portugal and other places in Europe from the 1590s onwards. These Sephardic Jews, who had been forced to live as Catholics in the Iberian Peninsula now chose to return to Judaism, a step that involved many practicalities. They needed to learn Hebrew, the language of the scripture, prayers and ancient Judaism while accustomed to Latin as liturgical language. Men had to be circumcised to be part of the Jewish community, although initially not all chose to do so. Rabbis and others with knowledge of Judaism and the Hebrew Bible had to be brought in to teach the newcomers about their ancestral faith. The Sephardic community also needed a cemetery to bury their dead, and came to desire a place of worship as well.

The request for a synagogue in such a political landscape was bold. In the early years of Jewish settlement in the province of Holland, several elite members of the Portuguese Jewish community dared to ask for privileges that included a synagogue in the cities of Alkmaar, Haarlem and Rotterdam. Haarlem and Rotterdam surprisingly gave the Jewish community permission for a synagogue there. In the meantime, the majority of Portuguese Jews residing in the Netherlands stayed in Amsterdam despite the substantial offers made by the other cities. Amsterdam’s city authorities, although hardly speaking out about the Jewish presence in the city, have unofficially granted them many freedoms and synagogues subsequently emerged there. At some point, three religious congregations (Bet Jacob, Neve Salom and Bet Israel, the last one established around 1618) made up the Portuguese Jewish community of Amsterdam. The three united in 1639 as Talmud Tora. 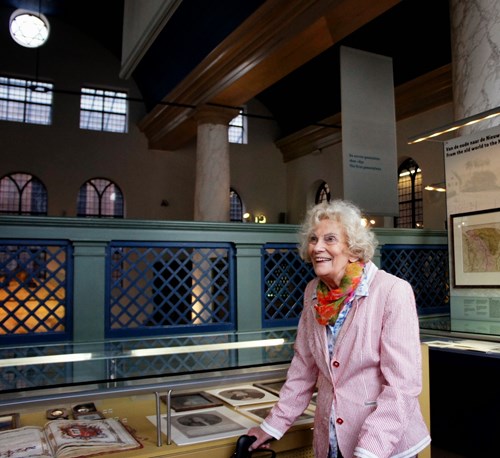 Just like hidden churches – Catholic churches among others - that were disguised as regular houses, synagogues materialised in a city that officially did not allow for their existence. And like churches such as Ons’ Lieve Heer op Solder, originally known as Het Haantje (the Rooster) or Het Hert (the Deer), synagogues were well-known not only by the city authorities but also by the general inhabitants of Amsterdam. Even tourists frequented the Amsterdam synagogues such as Frenchman Charles Ogier who visited the Neve Shalom synagogue on Houtgracht in 1636, confirming that these ‘underground’ prayer houses were part of Amsterdam’s reputation. In 1642, high official Frederick Henry, stadtholder and Prince of Orange, visited the synagogue that had belonged to the Bet Israel congregation and that now housed all three congregations after their union together with queen of England Henriette Maria, this time officially acknowledging that Judaism was here to stay.
Picture: People are still admiring the former Ashkenazic synagogues now housing the Jewish Historical Museum.

Four former Ashkenazi shuls now house the Jewish Historical Museum. Facing the museum from the side of the current Jonas Daniel Meijer square, the building on the left is the New Synagogue and the one on the right the Large Synagoge. The Grote Synagoge or Large Synagogue was inaugurated in 1671; the Nieuwe Synagoge, Neie Sjoel or New Synagogue arose in the second half of the 18th century. While Amsterdam largely tolerated non-public worship, the first synagogues were an eyesore to the Church councils that tried to stop the building of a synagogue in 1612. Nevertheless, the building continued and the first synagogue of Amsterdam became reality. The community had, although not on paper, their prayer house. These early synagogues have not survived. Those of later years are still standing. In 1675, the city gained a synagogue that was so large and so majestic in stature that it could not go unnoticed. Architect Elias Bouman, who had been involved in the construction of the Ashkenazi synagogues opposite the synagogue now known as the Portuguese Synagogue or in Amsterdam as the Snoge, chose a rather sober interior that reminds us of Protestant churches. Today the wooden floor of the synagogue is still covered with sand to absorb dust and moisture, although some like to believe in the more prosaic explanation of sand reminding of the time the Jewish people spent in the desert. The Portuguese Synagogue is one of the few synagogues in the neighbourhood that is still in use as such, housing besides the large main building a little winter synagogue and the historic library Ets Haim, a treasure trove of books and manuscripts. Without electricity or other signs of modernity, the synagogue stands like a subject from another time that has not noticed the changing of times around it. In the old Jewish neighbourhood or Jodenbuurt it remains a symbol of freedom in a somewhat polarising time.