“Finally,” I said to myself when I saw the first glimpses of La Paz through a bus window. Not just because it was a long ride through endless curves of a road sneaking through the mountainous Bolivian countryside, but also because I had heard many exciting things about the city.

La Paz, the capital of Bolivia, a city (two adjunct ones - La Paz and El Alto - to be precise) that is hugging a valley four thousand meters above the sea level, and guarded by the spirit of Illimani, revealed itself in the morning light. From a distance, it seemed endless, the bricked buildings covering all the slopes of the valley and housing more than 2 million human beings. There was a sense of beauty and harmony as much as chaos to the scene in front of me. Neighbourhoods with labyrinths of narrow streets were connected with wider roads criss-crossing the city. To me, the city seemed to lack any widespread urban planning, and was built according to some organic logic, that was beyond my understanding. 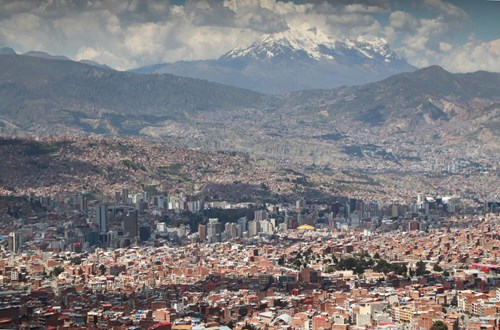 Picture of La Paz with Illimani towering above it

As our bus was moving in one of these main roads it became obvious that traffic bottlenecks are a normal occurrence and that the city has visible problems with its traffic flows. The municipal authorities, being painfully aware of the problem, had come up with an ingenious solution. They had decided to build a system of interlinked cable-car routes - Mi Teleferico - allowing the citizens to commute up, down and across the city slopes, high above the congested streets. 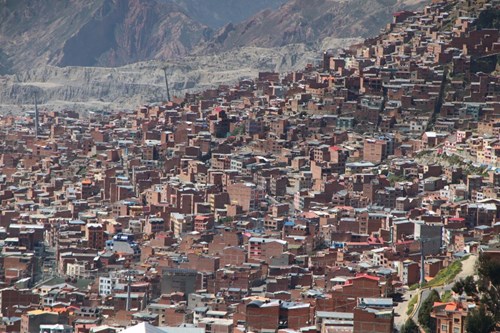 The day after my arrival to the city, I decided to explore this exciting new means of urban commute. From the streets around my hostel, I could clearly see the cables hanging above the buildings. However, it took me quite a while to navigate the pulsating urban labyrinth, so full of people, cars, merchandise and food sold on the pavements, and eventually find a station where I could board the Mi Teleferico. 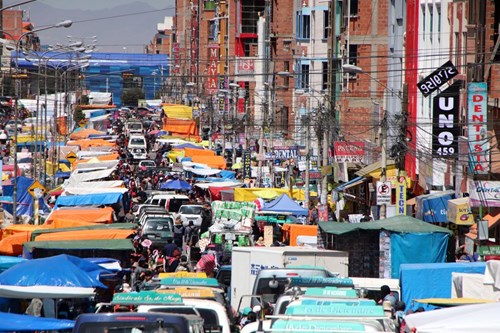 Picture of a market street in El Alto

Once in the air, while observing the hustle and the bustle in the streets I walked a short while ago, and hearing the barking of dogs and the sounding of car-horns from below, a strange feeling of tranquillity settled in me. People of different walks of life riding with me in the carriage seemed to share this sentiment. They were surveying the streets below as if they were sitting in a cinema watching a semi-interesting film. 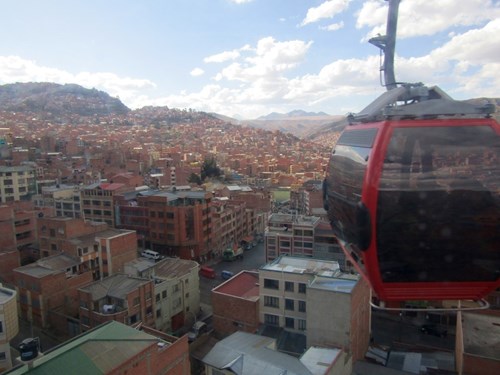 I quite soon started reflecting on all I had read about this system of commute criss-crossing the city.

Positives and Negatives of Mi Teleferico
Mi Teleferico is hailed as a genius commuting solution for such a mountainous city as La Paz where a metro could only be built with great difficulty. The cable lines stand on enormous pillars placed in densely constructed neighbourhoods. In comparison to building new wide roads that require tearing down whole blocks of buildings and evicting people living there. These pillars seem to offer a delicate and soft intrusion into the built landscape, with very little adverse effect on the lives of people living nearby. 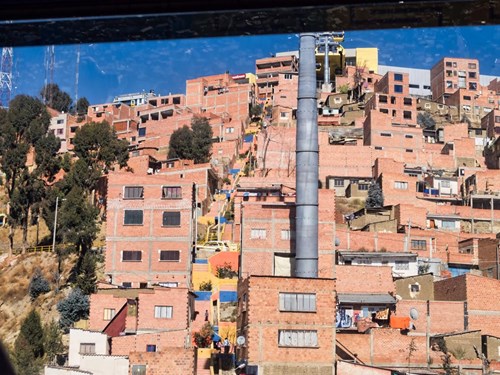 Picture of a Pillar

In addition, Mi Teleferico is lauded as a means of desegregation of the La Paz metro area. The centre of the capital is connected to the adjunct city of El Alto spreading on a plateau above the La Paz valley. El Alto was predominantly built by the citizens belonging to the Aymara ethnic group, who were traditionally pushed to the fringes of the Bolivian political and social sphere. With the help of Mi Teleferico, jobs and services in the centre of La Paz had potentially become much more accessible to people living in El Alto. Indeed, many of the carriages I sat in that day confirmed this, as I was surrounded by men in business suits as well as women in traditional Aymara dresses riding above the city.

There was one more effect of the Mi Teleferico that struck me as important. In comparison to the often crowded and loud streets bellow where people were competing for their space and sellers were hustling their merchandise, Mi Teleferico’s stations and carriages were quiet and clean. Commuters, when coming into a station and boarding a cable-car seemed to leave behind the anxiousness so ingrained in the behaviour of big-city dwellers. Thus, Mi Teleferico seemed to offer an alternative vision and possibility of how their city could function without the stress.

In spite of these positive effects on the lives of the inhabitants of El Alto and La Paz resulting in decreased discrimination, protection of homes, better access to jobs, increased mobility and even protection of health, the story would not be complete without noting the negative side to Mi Teleferico.

The cable car system is said to be too expensive for a city such as La Paz and that the funds could be invested more meaningfully. According to some estimates, the system will be repaid only in the next one hundred years, considering the profit it is currently making.

Furthermore, the huge traffic problems pestering the city due to the daily movement of its population cannot be resolved through a system of Mi Teleferico routes; with each capable of transporting a meagre three thousand people an hour.

In addition, some say that the public was not adequately consulted when the decision on this expensive transport system was made. Furthermore, the company designing and constructing the system was not selected in a public process allowing for sound competition. In such a way, political and civil rights of Bolivians might have been harmed.

As the day comes to and end
Finally, while contemplating the positives and negatives of the project of Mi Teleferico, I ended up with some questions. Is it even possible to consider the views of everyone potentially affected, when developing and running a city? Can the interpretation of what is in the public interest and thus the balancing of the public and private interests ever be optimal? And what is optimal after all? Or using the discourse of human rights, can the respect for all political, civil, social, economic and cultural rights of city dwellers ever be balanced properly? And properly according to whom?

After dusk, I was enjoying my last Mi Teleferico ride of the day, descending from El Alto back to my hostel in the centre of La Paz. Illimany the giant with an ever-watchful eye over the city was lit up in the afterglow of the day and a sense of serenity was emanating from the scene below me. I reflected on my thoughts on human rights and the city that kept my head occupied throughout the day and realized I am only slightly wiser. I locked my gaze with an old Aymara lady seated opposite me. We exchanged a smile in recognition that this day has come to its end and that our exploration of the world around us will surely continue the next day.