[Online symposium] Freedom of expression in the Olympic Movement

Athlete activism gained increased visibility with athletes vocally speaking out against police violence on social media after the death of George Floyd. This activism also shone a spotlight on the restrictions imposed by Sport Governing Bodies (SGBs), and in particular the International Olympic Committee (IOC), on freedom of expression during international competitions.

In July 2021 the Institute already hosted a Zoom-In Webinar on the IOC’s Rule 50 of the Olympic Charter discussing the issue. Now, with the Beijing Olympics under way and issues linked to human rights in China high on the public agenda, it is more important than ever to continue this debate in this Verfassungsblog symposium. In particular, the current regulation of freedom of expression by SGBs raises multiple concerns regarding its legitimacy, necessity, and proportionality.

Webinar on Rule 50 of the Olympic Charter and the right to free speech of athletes.

Finding the right balance
As Duval and Heerdt point out in their introduction to the Symposium, finding the right balance between freedom of expression and other legitimate objectives might be a difficult exercise for SGBs. In particular, because in some situations, such as in the context of hate speech, SGBs are expected to intervene and sanction those involved. The symposium is, therefore, also a space of constructive engagement for the contributors to offer suggestions and proposals for a more balanced regulation of speech in the Olympic Movement.

Read the full symposium on Verfassungsblog.

The Institute is conducting cutting-edge research coordinated by Dr Antoine Duval on transnational sports law at the Asser International Sports Law Centre and business and human rights via the Doing Business Right Project.

Keep up to date with our social media @Sportslaw_Asser or @DoinBizRight. 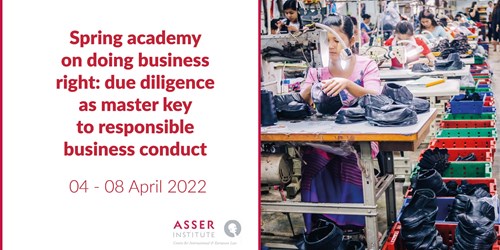