As the academic year draws to a close, the T.M.C. Asser Instituut celebrates two PhD candidates, Yehonatan Elazar-DeMota and Lisa Roodenburg, defending their dissertations. Tomorrow, Tuesday 8 June (12:00 hours CET), Yehonatan Elazar-DeMota will defend his thesis on ‘Nação legal consciousness and its contribution to the seventeenth-century Dutch republic debate on slavery and the slave trade’. A day later, on Wednesday 9 June (14.00 hours CET) Lisa Roodenburg will defend her thesis on ‘Anticipating friction – The role of human rights in urban debates on migration and diversity: The case of Amsterdam, Hong Kong and Buenos Aires’.

Both Yehonatan’s and Lisa’s research is part of the project ‘The Global City: Challenges, Trust and the Role of Law’, led by Asser chairperson and PhD-supervisor Janne E. Nijman. The Global City project is dedicated to a better understanding of the ever-evolving relation between the city and international law, and how they have shaped each other in the past, and are shaping each other today. The project, which consists of a team of four PhD researchers, has an innovative and multidisciplinary outlook, bringing history, geography and socio-legal studies to its examinations. Yehonatan and Lisa are the two first PhD researchers to defend their doctoral thesis, PhD researchers Julia van der Krieke and Miha Marcenko will follow later.

Very new research field
“I am delighted to see the first two PhD theses of the Global City project emerging. Both studies are really engaging and original contributions to the scholarly discussions”, says project leader Janne E. Nijman. “I am truly proud of Lisa and Yehonatan, who both made the transition to independent scholars so successfully and convincingly. I am looking forward to their defences and their future scholarly work. I am also grateful for the vision of the Gieskes Strijbis Foundation for its support of the Global City project, which has allowed us to contribute to a very new research field on cities and international law.”

Innovative examination
Janne Nijman: “With his thesis, Yehonatan provides us with an innovative examination of the question how key concepts of an emerging law of nations - such as liberty, dominion and property - were used in 17th century Amsterdam (a truly global city at the time) to develop justifications of slavery and slave trade. Yehonatan contributes very important insights into the history of international law, and he shows how an urban commercial elite contributed to the development of international legal thought to serve exploitative capitalism."

Human rights in cities
“Lisa’s dissertation examines the interactions between cities as network actors and human rights in the present”, continues Nijman. “Lisa takes a socio-legal approach to understand how human rights function in cities. She focuses on the debates on the governance of migration and diversity in three global cities: Amsterdam, Buenos Aires and Hong Kong. Thanks to the many interviews she conducted with people involved in human rights debates in these cities, Lisa can provide empirical data on the functions of human rights in cities, and therewith contribute with concrete observation to the current scholarly discussions on the localisation of human rights.” 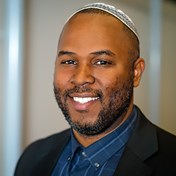 'Nação legal consciousness and its contribution to the seventeenth-century Dutch republic debate on slavery and the slave trade’
Yehonatan Elazar-DeMota’s thesis looks specifically at how the Nação (Hebrews of the Portuguese nation) in 17th Amsterdam contributed to the legal-political discussions of ius naturae et gentium  - that is the law of nature and nations - in the Amsterdam-Dutch Republic debate on slavery and the slave trade. Whilst many have undertaken research on the development of the ius naturae et gentium, Yehonatan’s research sheds light on the contribution of the Sephardim in Amsterdam. His research aims to add to the discussion by examining 17th century Portuguese Hebrew Nation in the Dutch Republic and its colonies, whose ideas of servitus, dominium and libertas were central to the justification of the Dutch Atlantic slave trade, as participants in, and contributors to the law of nature and nations. This thesis aims to reveal how the Nação in 17th century Amsterdam participates in and contributes to the thinking, reasoning, and arguing about slavery and the slave trade, via the language, concepts, and notions of the time, which was dominated by the language of ius naturae et gentium. Read more about Yehonatan’s research here.

Yehonatan will defend his thesis on Tuesday 8 June 2021 (12:00). His supervisors are Prof. Dr Janne Nijman and Prof. Dr Emile Schrijver. His advisor has been Dr Geoff Gordon. You can watch the defence via live stream.

‘Anticipating friction – The role of human rights in urban debates on migration and diversity: The case of Amsterdam, Hong Kong and Buenos Aires’
Lisa Roodenburg’s research centres on the interaction between the city, and its actors and human rights.  In recent years, local governments more frequently collaborate with other actors, such as NGOs and international organisations, for the realisation of human rights; they apply and translate human rights norms directly in their local policies and legislation – in some cases independent of their national governments. The urban engagement with human rights, however, is not a linear process. It involves making choices on how to engage with human rights: which rights to focus on, how to understand human rights, what kind of activity to organise, for which target group and with whom to collaborate. Such choices are not made in a vacuum, because cities do not function as coherently operating actors, nor do the local governments ruling them. On the basis of fieldwork research on migration and diversity debates in three very dissimilar cities - Amsterdam, Hong Kong and Buenos Aires - this research explores how the particularities of cities define how human rights function. Read more of Lisa’s research here.

Lisa will defend her thesis on Wednesday 9 June 2021 (14:00). Her supervisors are Prof. Dr Janne Nijman and Prof. Dr Ernst Hirsch Ballin. Her advisor was Dr Geoff Gordon. You can watch the live stream here.

About the Global city project
The Global City project is led by Prof. Dr Janne Nijman along with supervisors Dr Geoff Gordon, Prof. Dr Ernst Hirsch Ballin and Prof. Dr Emile Schrijver. Julia van der Krieke and Miha Marcenko are expected to defend their thesis at a later stage. The project started in September 2016 and is funded by the Gieskes-Strijbis Fonds. As part of the project, in 2017, project leader Janne Nijman initiated the establishment of a new Study Group of the International Law Association (ILA) entitled ‘The Role of Cities in International Law’, together with Prof. Helmut Aust, Freie Universität, Berlin. Together, they chair the Study Group. Anouche Beaudouin and Jolene Lin are co-rapporteurs.

About the T.M.C. Asser PhD programme
The T.M.C. Asser Instituut’s PhD programme trains researchers to work at the cutting edge of international law, by conducting independent research at the interface of academia and practice. Our PhD programme is interdisciplinary, and designed to foster greater insights into the practices of international law in times of change. Our work is organised around close contact between supervisors and PhD researchers, supported by professional training activities, and featuring collaborative theoretical and methodological queries intended to assist our PhDs in the development of each dissertation. The Asser Institute is also a hub for inter-university PhD networks.