Grotius lived through a time of great upheaval in Europe as well as in his country of birth, the Dutch Republic. The religious, political and constitutional convulsions that struck the Republic destroyed Grotius' career but also, in combination with fundamental changes in the intellectual outlook of early seventeenth-century Europe formed his views of God, nature, society, politics and law. 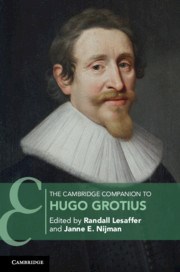 The Cambridge Companion to Hugo Grotius (Cambridge University Press (2021), available in hard copy and open access) is aimed at students, teachers and general readers, while its chapters also draw upon and contribute to recent specialised discussions of Grotius’ oeuvre and its later reception. Contributors to the volume cover the width and breadth of Grotius’ work and thought, ranging from his literary work, including his historical, theological and political writing, to his seminal legal interventions.

While giving these various fields a separate treatment, the book also delves into the underlying conceptions and outlooks that formed Grotius’ intellectual map of the world as he understood it, and as he wanted it to become, giving a new political and religious context to his forays into international and domestic law.