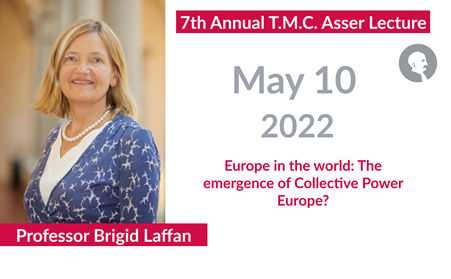 We are delighted that emerita professor Brigid Laffan, an internationally recognised expert on the European Union, will deliver the 20‌22 Annual T.M.C. Asser Lecture. The title of her lecture is: ‘Europe in the world: The emergence of Collective Power Europe?’ During the (in-person) lecture, Brigid Laffan will analyse the challenges facing Europe in ‘a world of geopolitical shift and shock’.

Abstract: 'Europe in the world: The emergence of Collective Power Europe?’

"On the 24th of February 2022, the post-war international order ended, as did the 1989 peace dividend. A major nuclear power Russia, invaded its neighbour Ukraine, targeting civilians, reducing urban centres to a rubble and triggering a major displacement of people in Europe. For the European Union (EU) and the wider community of democracies, this is a critical juncture with implications for the security and political economy architecture of Europe and the wider world for decades to come.

The Russian invasion takes place against the return of hard geopolitics, Great Power competition and the weakening of multilateral institutions. Over the last decade, the EU, a polity but not a state, has been grappling with its response to new dynamics in global politics. Europe’s search for a role has focused on ill-defined concepts such as strategic autonomy and European sovereignty. The collective EU wants to be a player, not a plaything but is challenged by the imbalance between its economic power, diverging preferences of the member states and an inchoate approach to security which relies on NATO and the Transatlantic Alliance.

The focus of this lecture is threefold. First, it explores the response of the EU and the community of democracies to Putin’s war. Second, it analyses the impact on global politics and Great Power competition and three, assesses the consequences of the war for the dynamic of European integration and the nature of the EU."

About Brigid Laffan
Until this summer, Brigid Laffan was director and professor at the Robert Schuman Centre for Advanced Studies and director of the Global Governance Programme at the European University Institute (EUI), Florence, where she has worked since 20‌13. In 20‌18, Politico ranked Laffan, a long time professor of political science who grew up in Ireland, among the women who shape Europe. Laffan is a leading thinker on the dynamic of European integration. She has published a number of important books on Europe, such as Integration and Co-operation in Europe (19‌92), The Finances of the Union (19‌97), Europe's Experimental Union - Re-thinking Integration (20‌00, co-authored), Core-periphery Relations in the European Union (20‌16, co-edited) and Europe’s Union in Crisis: Tested and Contested - West European Politics (20‌16).
Laffan was awarded the THESEUS Award for outstanding research on European Integration, and the UACES Lifetime Achievement Award. In 20‌10, she received the Ordre national du Mérite by the President of the French Republic.

Read more
In an interview by journalist and EU watcher Caroline de Gruyter for Dutch newspaper NRC, Irish professor Brigid Laffan, one of the leading thinkers on European politics, analyses the current geo-political threats facing Europe. According to Laffan, ‘bold displays of power’ have, in world politics, replaced the policies that have made Europe influential: its open channels and multilateral relations. Examples are Belarus, pushing migrants into the EU. Or the UK, violating agreements on Northern Ireland and on a collision course with France over migrants and fishing licenses. And Russia, stoking fires in the EU, the Balkans and Ukraine. Read more.