[Interview] Researcher Rebecca Mignot-Mahdavi: “States have used the law as a tool to legitimise intrusive security practices, which put individual liberties at risk”

Rebecca Mignot-Mahdavi is a counter-terrorism researcher, whose work focuses on our evolving legal and policy capacity to deal with security threats. In a number of recent publications, Mignot-Mahdavi questioned the legality of France’s air strikes in the Sahel: "These strikes consisted of firing on people whose identities were not known, and who had not been witnessed as participating in acts of combat." An interview.

What is the main focus of your research?
"The goal of my research is to understand the legal/security architecture in the context of counter-terrorism. I am driven by the question of how three factors – the law, technology and security practices – interact with- and reshape one another. My overarching research question is whether and to what extent the international legal order, and traditional distinctions such as criminal/enemy, inside/outside the domestic borders, battlefield/non-battlefield, peace/war, human/non-human are being blurred by data-driven security practices which foster paradigmatic legal changes."

I reach out to multiple audiences, and in different forms. This has been both challenging and extremely rewarding

Why is this topic important? What are you hoping to achieve with your research?
"Since 9/11, many states have participated in creating global security frameworks. They have used the law as a tool to legitimise intrusive security practices, which put individual liberties at risk. They are also using new technologies, such as drones and algorithmic systems as tools to anticipate threats. Making sense of how these frameworks came into being and how they continue to evolve, and understanding the functions performed by the law in this equation, is essential when you want to form an opinion about our contemporary societies and for deciding how to act upon it."

What is the best thing about working at the Asser Institute?

"Asser researchers get to interact with policy makers and share with them independent policy-oriented recommendations. In order to grasp what is novel and powerful about the contemporary global security paradigm, I use both robust doctrinal analysis and socio-legal methods and the Asser Institute is a place that welcomes the use of diverse methods. Above all, I enjoy witnessing the fascinating work done by my colleagues."

What has been your proudest or most challenging moment as a researcher thus far?
"In my work, I reach out to multiple audiences, and in different forms. For instance through media appearances, or when in charge of professional trainings. This has been both challenging and extremely rewarding at the same time. It is a challenge because I’ve had to craft several languages to speak about the same issues in ways that are accessible to all audiences. And obviously it is rewarding because all these conversations are extremely helpful in developing my reflections on these issues, in rethinking certain assumptions and for testing hypotheses."

Why did you choose to study international law?
"I come from a multicultural family environment. Because of this, I have always been intrigued by points of tension in our geopolitical order, and aware of the power that states have over their populations. Studying international law was a way for me to acquire some tools to understand the world we live in, its concrete power dynamics, and it helped sharpen my analytical and critical skills.”

If you were to offer advice to you academics, or legal scholars wishing to enter into the field you are in now, what would it be?
"I am myself a young academic, so I have to think about which advice I would give to myself (laughter)! I guess I would advise anyone doing this job to commit to lifelong learning and to exercise radical doubt, including -and starting with- self-doubt."

Can you tell us about your recent appearance on the French Mediapart programme “A l’air libre”?
"Together with investigative journalist Rémi Carayol, we were invited by A l’air libre to discuss the legality of the strikes conducted by France in the Sahel. We evoked the possible signature strikes conducted by France in the region. These strikes consisted of firing on people whose identities were not known, and who had not been witnessed as participating in acts of combat, or had behaved suspiciously. I recalled that even under the most permissive rule regulating target selection, there must be signs of lasting integration into the enemy group. Yet, some decisions to strike seem to be based on the mere facts that these individuals carried weapons, or were military-aged males. Or that they participated in an unusual gathering in a region known for terrorist groups presence. But these elements, even when taken together, do not prove lasting integration of an individual into a terrorist group party to an armed conflict."

How does this topic overlap the lecture you will be giving in our upcoming summer programme on terrorism, countering terrorism and the rule of law?
“It is directly related to the training course on terrorism, counterterrorism and the rule of law. In the course, I will focus on France’s war in the Sahel, on how the enemy is being framed, how extensive the war is in time, space and methods of target selection, and what the law has to say about such a long-lasting intervention. We will study these issues both from the angle of the law on the use of force (jus ad bellum) and the law of armed conflicts (jus in bello).” 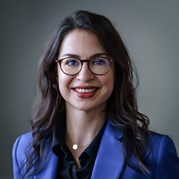 Dr Rebecca Mignot-Mahdavi is a researcher in the ‘Human Dignity and Human Security in International and European Law’ strand, a research fellow at ICCT and the managing editor of the Yearbook of International Humanitarian Law by T.M.C. Asser Press. Her work reflects on counter-terrorism and, more precisely, on our evolving legal and policy capacity to deal with security threats, where new forms of non-state transnational risk, counter-risk strategy and technology are at play.

Read more
Rebecca recently discussed the legality of the strikes conducted by France in the Sahel in recent publications (in French):

Advance your knowledge on counter-terrorism
The 9/11 attacks in 2001 triggered a global ‘moral panic’ in which states responded with an increase in security-related laws and counter-terror measures. These responses have led to the curbing of financial supports, increased surveillance, limitations on the right to freedom of speech and religious freedoms and the revocation of nationalities and citizenship statuses.

Our renowned 11th Annual summer programme on terrorism, counter-terrorism and the rule of law (August 30 – September 3, 2021) asks, twenty years on from the 9/11 attacks: how effective are these counter-terrorism measures? How proportionate and legitimate is the current approach? The course will bring you inspiring and thought-provoking lectures by leading experts in the field, interactive sessions, virtual study visits, group discussions (Chatham House Rules), panel presentations and a great, global network in the field. Read the full programme.

Or watch a short video on last year’s edition. More info on the training programme here.

In November 2021, our upcoming Masterclass entitled ‘The modern foreign fighters phenomenon – repatriation, prosecution and/or reintegration?’ will delve into the question of how states can address the legal and policy conundrums triggered by foreign fighting. All sessions in this Masterclass will be provided by the Asser Institute’s core researchers on countering terrorism – Rumyana van Ark, Rebecca Mignot-Mahdavi and Christophe Paulussen – complemented by practitioners, such as prosecutors who have tried cases of foreign fighters themselves.