In quest of liberty, justice, and peace: a new biography on Asser’s private and public life

A new biography on legal scholar and practitioner Tobias Asser, the name giver of T.M.C. Asser Instituut, traces the life of a public intellectual and the broader history of ideas. Asser Institute president Ernst Hirsch Ballin wrote the foreword to the two-volume biography, which is written by Arthur Eyffinger and published by Brill. In his foreword, Hirsh Ballin calls to reflect on- and learn from the life of Dutch Nobel Peace Prize winner Tobias Asser.

The man behind the name
Many, familiar or unfamiliar with the law, have heard of Tobias M.C. Asser’s name. But who was the real man behind the many accolades? And how did he come to deserve to be titled the ‘father of the Hague tradition of international law’?

“This biography is the first major, in-depth study of Asser’s life and work,” notes Ballin. Asser, a descendant from a Jewish family, was appointed professor at the University of Amsterdam at an exceptionally young age, and earned international recognition as a leading figure in promoting peace and justice. He was a keen supporter of international law and multilateral conventions in a variety of domains.

“Asser’s life and work are inspiring examples of how individuals are able to transgress the confinements of descent and discipline without forgetting where they came from,” argues Ballin. “Not being afraid of differences is the key to reinforcing trust in the belief that human beings have a common dignity that has to be recognised in law.” 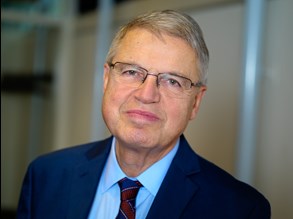 Man in history
Through the lens of Tobias Asser’s life, this biography also investigates the history of ideas in a particularly fascinating time period, prompting us to take a closer look at our times in turn. “Its starting point lies in the mid-19th century, when liberal ideas about state and society in Europe were on the rise”, explains Ballin. “And its end comes just before the outbreak of the First World War, which brought disaster both to millions of people and to Asser’s ideals of peace and justice.”

Asser lived in a period during which efforts to cooperate were increasingly overshadowed by conflict. Hirsch Ballin:  “History helps us to understand how we can relate to the dilemmas of our time […] Patterns that were recognisable in the past can also help us to see what is going on now, what should be avoided and what should be pursued.”

Upcoming symposium
The academic director of the Asser Institute Janne Nijman will be speaking at a mini-symposium to commemorate Asser’s legacy on Thursday 29 August, 17.30-20.00 hours, in the Auditorium of the The Hague Academy, Peace Palace, The Hague. The symposium is jointly organised by The Institut de Droit international and the Royal Netherlands Society of International Law.

Arthur Eyffinger, the author of the biography, will be presenting the first copy of the book to Prof. Daan Asser, great-grandson of Tobias Asser.