On 29 November 2018, Prof. Martti Koskenniemi (University of Helsinki/Erik Castrén Institute of International Law and Human Rights) delivered the Fourth T.M.C. Asser Lecture on "International Law and the Far Right: Reflections on Law and Cynicism", at the Academy Hall of the Peace Palace, The Hague.

We created a short video about the event:
A full recording of the lecture is available here:
In an exclusive interview in Opinio Juris by Asser researcher Dimitri Van Den Meerssche, Prof. Koskenniemi further elaborated on the theme of the Annual Lecture by critically reflecting on the general state of international law, as well as its role in the rise of the far right. You can read the full interview here. Prof. Koskenniemi did an interview with the NRC Handelsblad, which is available here. 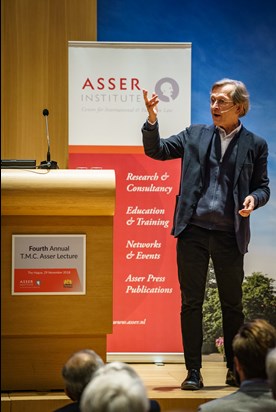 The programme can be found here.