The refusal to repatriate and prosecute foreign fighters and families can only be explained by a lack of political will, and not because of a lack of prosecutorial options. That is the main conclusion of a new research paper by Asser senior researcher Christophe Paulussen and Tanya Mehra (ICCT The Hague).

States have been reluctant to repatriate their foreign fighters and families for a variety of reasons. One of these is of a legal nature, namely that prosecution at home would be too difficult because of a lack of evidence.

While acknowledging that securing evidence is and will remain difficult, this paper points to a number of evidentiary and charging opportunities that show potential in somewhat overcoming this challenge. These could assist prosecutors in focusing on what should have their priority, namely the actual acts committed, such as war crimes and other international crimes.

The paper also demonstrates that, in addition to membership of a terrorist organisation, there are other charges out there that do not require establishing what the returning foreign fighter has actually done while being abroad. The aim of presenting these in this paper should not be seen as an endorsement – their critical examination will make this quite clear – but as a demonstration of the fact that the refusal to repatriate and prosecute can only be explained by a lack of political will, and not because of a lack of prosecutorial options.

Read more
Towards a Right to Sustainable Security of Person in Times of Terrorism? Assessing Possibilities and Limitations Through a Critical Evaluation of Citizenship Stripping and Non-Repatriation Policies (Journal of Conflict and Security Law)

On the basis of the case studies of deprivation of nationality and the non-repatriation and possible prosecution of foreign fighters and their families, this article will argue that some counter-terrorism measures, adopted under the justification of protecting national security, will not make these countries, and thus also the individuals under its jurisdiction, safer. The article also asserts that while the general concept of sustainable security can certainly help at the policy level in encouraging governments to move away from mere national security thinking, the situation is different at the level of human rights. The existing right to security of person arguably does not go that far to be able to block the inefficient counter-terrorism measures as discussed in this article and an extension of this right, to a right to sustainable security of person, should not be pursued.

Advance your knowledge on counter-terrorism
Our upcoming Masterclass ‘The modern foreign fighters phenomenon - repatriation, prosecution and/or reintegration?’ (November 15 & 16, 2021) will delve into the question of how states can address the legal and policy conundrums triggered by this contemporary form of foreign fighting. All sessions in this Masterclass will be provided by the Asser Institute’s core researchers on countering terrorism – Dr Rumyana van Ark and Dr Christophe Paulussen – complemented by practitioners, such as prosecutors who have tried cases of foreign fighters themselves. See the full programme. 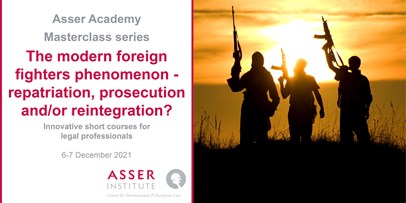