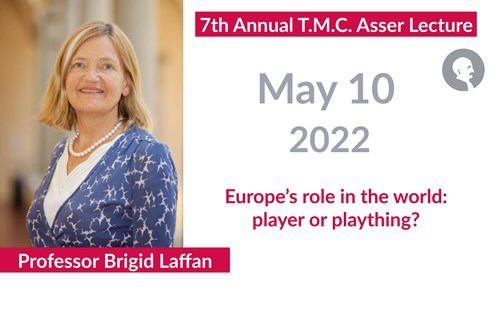 “We are witnessing a return of Great Power competition and competition between political and economic systems. Urgent challenges - digitalisation, the future of work, the climate crisis, migration and inequality - require national, regional and global responses. The European Union, a polity but not a state, has to adapt and adjust to shifts in global politics. But it struggles to amass collective power or to deploy strategically its resources and capabilities. What are its challenges?”

We are delighted that emerita professor Brigid Laffan, an internationally recognised expert on the European Union, will deliver the 20‌21 Annual T.M.C. Asser Lecture. The title of her lecture is: ‘Europe’s role in the world: player or plaything?’

During the 7th Annual T.M.C. Asser Lecture, Brigid Laffan will analyse the challenges facing Europe in ‘a world of geopolitical shift and shock’.

About Brigid Laffan
Until this summer, Brigid Laffan was director and professor at the Robert Schuman Centre for Advanced Studies and director of the Global Governance Programme at the European University Institute (EUI), Florence, where she has worked since 20‌13. In 20‌18, Politico ranked Laffan, a long time professor of political science who grew up in Ireland, among the women who shape Europe. Laffan is a leading thinker on the dynamic of European integration. She has published a number of important books on Europe, such as Integration and Co-operation in Europe (19‌92), The Finances of the Union (19‌97), Europe's Experimental Union - Re-thinking Integration (20‌00, co-authored), Core-periphery Relations in the European Union (20‌16, co-edited) and Europe’s Union in Crisis: Tested and Contested - West European Politics (20‌16).
Laffan was awarded the THESEUS Award for outstanding research on European Integration, and the UACES Lifetime Achievement Award. In 20‌10, she received the Ordre national du Mérite by the President of the French Republic.

Watch this video to learn more: